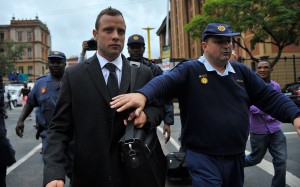 Pistorius has denied the murder charges and said that he shot Stenkamp, mistaking her for an intruder who had entered his house through the toilet window, but the state insisted that it was pre-meditated murder.

If found guilty of murder, Pistorius could face life imprisonment.

After more than a month of deliberation, Judge Masipa will decide if Pistorius’s version of events – that he was deathly afraid of an intruder he believed had broken into his house, prompting the shooting – is true.