Bhaduri had led the legendary Mohun Bagan team that became the first Indian team to beat a British team in the final of a major tournament when they got the better of East Yorkshire Regiment 2-1 in the 1911 IFA.

Gouri Bhaduri, the grand daughter-in-law of Shibdas Bhaduri and the oldest surviving member of the family, received the tickets from the former Spain star.

Tickets for the first FIFA event will go live at exactly 7.11 p.m. on Tuesday, paying tribute to the year in which a bunch of bare-footed Indian players from Mohun Bagan created Indian football history.

The official draw for the tournament will take place on July 7.

“I was very curious to discover the country and its people. It gives me immense joy to confer this honour,” Puyol told the media after handing over the tickets to the 80-year-old.

Puyol was the star Central defender of the Spain team that defeateda Holland 1-0 in the final of the 2010 World Cup.

Indians will get the chance of seeing World Cup matches live and that experience is completely different from watching it on television.

“You can feel the energy in the stands. At a FIFA U-17 World Cup, you can see the stars of the future. Indians should make the most of this opportunity and come in numbers to watch international teams play at their home,” he added.

Puyol was involved in a friendly match with local children and popular singer and Union Minister Babul Supriyo after the ceremony. 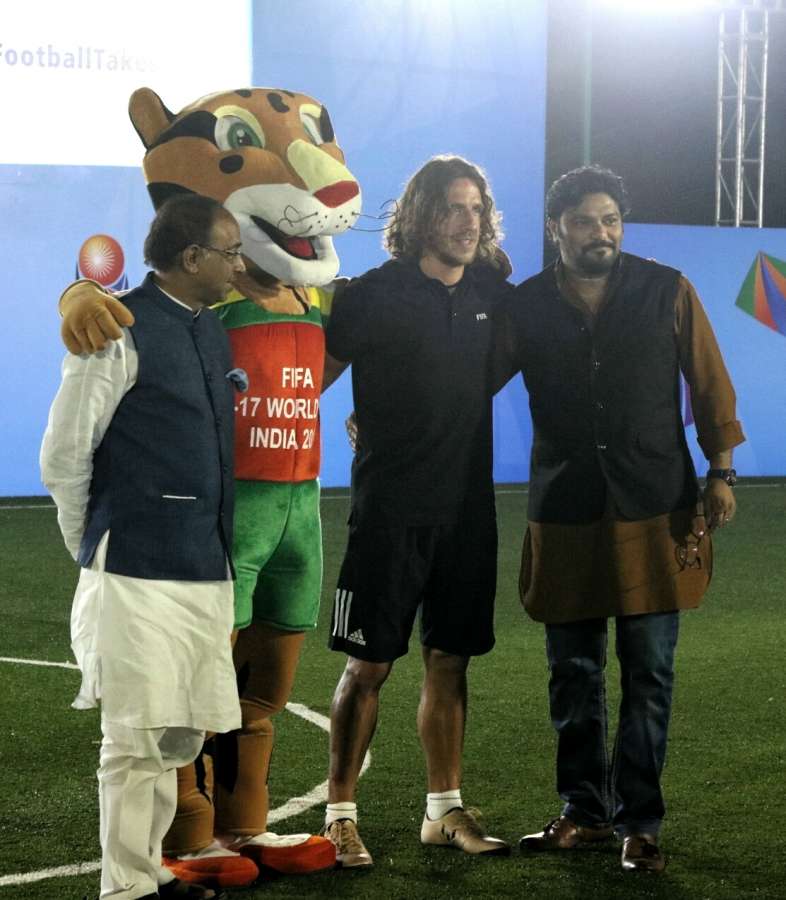 Sports Minister Vijay Goel, who was also present on the occasion, asserted that the U-17 World Cup will help to improve the popularity and the standard of the “beautiful game” in India.

Goel, who has been on a tour of the various venues of the U-17 World Cup around the country, expressed satisfaction with the level of the preparedness.

“I have visited Kolkata, Kochi and Goa. I am happy with what I have seen. There were a few problems, but those are being sorted and we will be ready in time,” he said.

Elaborating on the ticketing programme, Goel said: “We have made sure the tickets are priced very nominally, you can buy a World Cup ticket for less than Rs 50, so there is no reason not to come and support this tournament in large numbers.”