With just 18 days to go for the world’s biggest sporting extravaganza — the 2016 Olympics in Rio de Janerio — India’s tennis star Sania Mirza on Sunday pointed out that though mixed doubles is the toughest event, there is no doubt that it is the country’s best bet of winning a medal at the Games.

The 29-year-old, who is ranked World No.1 in women’s doubles, will be partnering Rohan Bopanna in the mixed doubles event at the Rio Games starting on August 5.

“I am looking forward to the Rio Olympics. It is my third Olympics. Obviously there is no guarantee in sports, all you can do is go and give your best and that’s what I and Bopanna are going to try and do, and do whatever we can and win a medal at the Games. Rest is up to God,” Sania told in an interview.

“See, I think this is the toughest among other events in tennis. There are top mixed doubles players from the world coming to compete. There will be world’s top 10 players; it will surely be a challenging event. But at the end of the day, mixed doubles is the best bet we have in tennis to win a medal,” the Mumbai-born, who will play in her third Olympics, said.

Sania will also be partnering with 22-year-old Prarthana Thombare in the women’s doubles and the Hyderabadi believes that it will be a great experience and a dream come true for the youngster to represent her country in Olympics at such a young age.

“I think it is very good for Prarthana to get such a big experience for her at such a young age, to go and play at the Olympics and represent the country. I think for us as athletes, it is a dream come true for us to represent country in the Olympics. Winning a medal is always a priority but going out there as Indian and playing at the Olympics is a big thing. So, I am very happy for her that the experience that she will gather,” the six-time Grand Slam winner said.

Bopanna had requested the All India Tennis Association (AITA) to pair him with Saketh Myneni for the men’s doubles event at Rio. But the AITA) selection committee ignored his plea and paired him with veteran Leander Paes, thus keeping the 18-time Grand Slam winner’s dream of playing in a record seventh straight Olympics alive.

Sania, who recently launched her autobiography ‘Ace against Odds’, praised the combination of Bopanna and Paes, saying that the duo has a good chance of finishing on the podium if they deliver their 100 percent on the court. 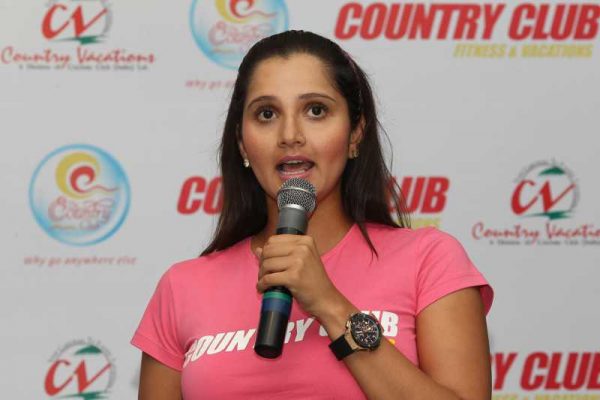 “I think they (Paes-Bopanna) are obviously good players. Everybody goes in with a chance, which is the way it goes. But everybody needs to try and play and give their best and 100 percent, so there are no favourites but at the end of the day everybody is there with a fighting chance,” she added.

Speaking on the good response she received from her fans worldwide to her recently launched autobiography, Sania said she was happy that the book could help fans get insight into her life.

“I am really happy, I couldn’t be much happier that I got to tell my story to the world. That the fans did like it and appreciated it. They also may have got to the insight into understanding me a little bit better,” she added.

Sania was also prompt to point out that it is unfortunate 2012 London Olympics silver medallist wrestler Sushil Kumar os not being part of the Rio Olympics, but named shooting, badminton, boxing as the other sports which can make India proud at Rio.

“I think we are very good always in wrestling, even though I think it is very unfortunate that Sushil is not going. We also have come up with a few meals in shooting. These are our strong points obviously. And boxing and badminton — hopefully we have a few medal hopes,” she said.

India this time will send the largest ever (90 persons) Olympic contingent to Rio.

“Congratulations to him (Vijender), I think it is his seventh professional bout win. It is sometimes very difficult to make that big jump, and he has done it so successfully and I wish him all the best in future fights,” she added.

Sania, who was named in Time magazine’s 2016 list of the 100 most influential persons in the world, said she would like either Deepika Padukone, Parineeti Chopra or any top Bollywood actress to play her in her biopic.

“I don’t know — there are many great actresses who can be cast in my biopic. I think when the time comes, there will be a lot of young girls who can play me. I think maybe Deepika or Parineeti, there’s a lot of them. So whoever wants to accept the role, I will be honoured,” Sania signed off.