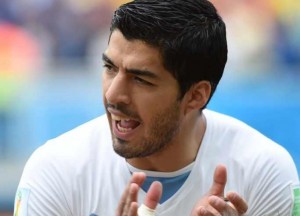 Uruguay’s Luis Suarez today was involved in another World Cup controversy as he appeared to bite Italy’s Giorgio Chiellini during their Group D clash.

Chiellini pulled his shirt down to show the referee an apparent mark on his shoulder made during the clash.

“It was ridiculous not to send Suarez off. It is clear, clear-cut,” Chiellini told Italian television station Rai TV.

A spokesman said: “We are awaiting the official match reports and will gather all the necessary elements in order to evaluate the matter.”

Uruguay coach Oscar Tabarez tried to play down the incident and believes there is a vendetta from certain media towards Suarez.

“I’d like to see the images first before making any comment. If it happened, then the referee probably didn’t see it,” said Tabarez.

Liverpool’s Suarez was banned for 10 games for biting Branislav Ivanovic in a Premier League match in April 2013.

He was also banned for seven games for biting PSV Eindhoven midfielder Otman Bakkal’s shoulder while Ajax captain in 2010.

Suarez was sent off, while Ghana missed the subsequent penalty and went on to lose the World Cup quarter-final on penalties.

Italy’s coach, Cesare Prandelli, said: “I didn’t see Suarez biting him but I saw the bite-marks on his shoulder but the referee’s assistants were so busy they didn’t see anything.

“It’s a shame, it’s a real shame that it turned out like this.”

“I could not believe it,” he said. “The pictures are pretty damning and, if found guilty, they should hammer him.

“He has built up his reputation over the last 12 months and to come into the tournament and do that, I am lost for words.

“I can understand why the referee did not see it clearly but they can look at video evidence and there is no way he can get away with that. It is pretty clear.