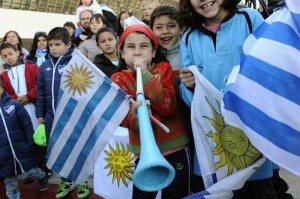 Liverpool striker Suarez, who missed the first match after undergoing surgery on his knee just four weeks ago, struck in the 39th and 85th minute to keep Uruguay’s hopes alive of progressing through to the last 16.

Wayne Rooney scored his first World Cup finals goal in the 39th minute to cancel out Suarez’s opener but couldn’t save England from some very poor defending at the back.

England are still not out and have to beat Costa Rica and hope Italy win both their remaining games so that second position comes down to goal difference.

The game started at a tremendous pace with England putting the early pressure on Uruguay.

Uruguay, though, slowly started to gain a foothold in the match with Luis Suarez showing some early danger signs.

England struggled to retain the ball as Uruguay put on the pressure. Liverpool winger Raheem Sterling in particular was crowded whenever he got a touch.

There was a good spell of pressure from England that led to a free-kick being awarded on the left hand side.

Captain Steven Gerrard’s deep free-kick was met by Rooney at the far post the striker’s header from a yard out struck the crossbar.

Roy Hodgson’s side were caught on the hop as Edison Cavani floated a teasing ball from the left with Uruguay charging forward, Suarez got behind Phil Jagielka and rose well to head the ball past a helpless Joe Hart.

Uruguay started the second half better of the two teams as England looked all over the place at the back.

The ball was played through to Cavani who found himself one on one with Hart but he put his shot wide.

England settled after the ropey first seven minutes of the second half and put massive pressure on the Uruguayan defence.

Substitutes Ross Barkley and Adam Lallana gave England attack the much-needed impetus and in the 75th minute the pressure finally paid off as Wayne Rooney netted in his first World Cup goal.

Right-back Glen Johnson in a brilliant run went past two Uruguay defenders in the box and played a low ball across goal for an unmarked Rooney to tap it in to the net.

Momentum seemed to be on England’s side as Sturridge once again broke into the opposition box but his shot was palmed away by the goalie.

Once again much against the run of play, Suarez struck the death knell for the English in the 85th minute thanks to more calamitous defending.

A high ball played forward saw Gerrard jump to meet it but the Liverpool midfielder managed to only flick the ball off the back of his head and into the path of the charging Suarez who blasted it into the net past Hart.

Uruguay held on to record a memorable win an keep their hopes alive in this year’s tournament.