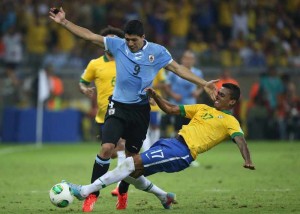 Suarez missed Uruguay’s 1-3 loss to Costa Rica Saturday as he continued his recovery from keyhole surgery on his left knee, reports Xinhua.

But the 27-year-old trained freely with La Celeste’s squad Monday and guaranteed he would be involved at Sao Paulo’s Itaquerao stadium Thursday.

“At no moment did I think I would lose the chance of playing in the World Cup. I’ve never thought that during my recovery. Now I am 100 percent,” the Liverpool striker said.

Despite the encouraging news, Uruguay coach Oscar Tabarez did not say if Suarez would start against Roy Hodgson’s team.

“It is a possibility, I can say no more,” Tabarez said at a press conference.

“I hope he’s fit,” Sturridge said from the team’s training base in Rio de Janeiro.

“We look to face the best Uruguay team to show what we can do. I don’t think there are any fears or anxieties. We are just excited.

“It’s not just about Suarez, we can’t have an obsession with him. (It is the) same for them against us. It’s a team game, not about individuals. It’s a game of football. He’s trying to help his country and I am mine. I wish him well.

Sturridge said he had not been in contact with his club teammate since the tournament began.

“I’m not really on texting terms with Luis at the moment. He hasn’t asked me for any clues and I haven’t asked him. Whether they have Luis or not, we’ll play the same.”