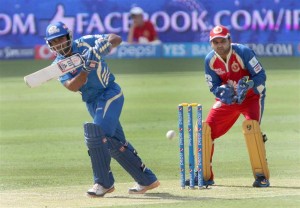 With barely a day to recover from the mauling they received at the hands of table-toppers Kings XI Punjab Friday night, the pressure will be squarely on Royal Challengers Bangalore (RCB) who will be hosting Rajasthan Royals for a crucial Indian Premier League (IPL) game here Sunday.

Struggling in the bottom half of the eight-team league, RCB are on six points after eight matches and need to get a move on if they hope to qualify for the play-offs, while Rajasthan, currently on 10 from eight outings occupy third spot behind Punjab (14) and Chennai Super Kings (12).

RCB’s much-hyped batting line-up has been the focus of attention not for its array of big-hitters, but rather the collective failure.

The likes of Chris Gayle, skipper Virat Kohli and Yuvraj Singh, their biggest signing at Rs.14 Crore, have been woefully short of runs with South African ace AB de Villiers, the most consistent of the willow-wielders, being the only high-point.

Adding to their woes is the bowling that at best has been average, despite the odd good performances from seamer Harshal Patel and leg-spinner Yuzvendra Chahal.

The net result has been a sequence of defeats that underlined RCB’s inability to put in a solid performance on a consistent basis.

Thus, going into Sunday’s game against Rajasthan Royals, RCB will be under tremendous pressure to deliver in front of their passionate home fans while facing a test of character, both individual and collective.

In contrast, the Royals, under Shane Watson, have performed far better though they, like the RCB, are coming off a defeat that saw them capitulate to 102 all out chasing 134 against the Sunrisers.

The Royals, who had earlier lost to Punjab and the Super Kings, have shown a wonderful all-round ability that was much in evidence during their five victories.

The Royals have been well-served by teenage batting sensation Sanju Samson and opener Ajinkya Rahane, besides other home-grown talent such as leg-spinner Pravin Tambe, the grand old man of IPL at 42, seamer Rajat Bhatia and Dhawal Kulkarni.

Thus, the Royals have the firepower to get past RCB on the morrow unless Kohli and his boys can come up with a performance commensurate with the wealth of talent they boast.

While a win Sunday will cement Royals’ position in the top three, RCB, runners-up in 2009 and 2010, can ill-afford to drop any more points.