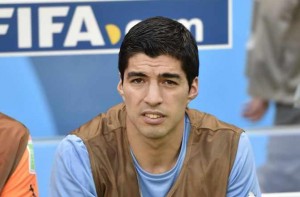 Liverpool striker Luis Suarez, who missed Uruguay’s opening match at the World Cup due to an injury, returned to the starting line-up against England and became the Man of the Match to make the difference here Thursday.

Suarez had been doubtful for the game following a surgery last month to repair a small meniscus tear, but his brace helped Uruguay beat England 2-1 in the Group of Death which also has Italy and Costa Rica, reports Xinhua.

Uruguay and England, who both lost their first round Group D matches, fought closely to stay alive.

Suarez haunted his Liverpool team-mates in the 39th minute when the ball was spread to forward Edinson Cavani on the Uruguay left flank. Cavani chipped a delicate ball in to the onrushing Suarez, who nodded it superbly past England keeper Joe Hart.

Suarez, 27, said after the match that he endured a difficult spell on the sidelines following the injury to his knee, and has expressed his gratitude towards his family for their support.

“This is incredible. I had told my team-mates I had a dream that I was going to score two goals in this match,” he said.

“We had to win this match and we did it playing like Uruguay does in these kind of games. Now we have to think about Italy, who are another very important rival.

“This victory is for all those people who said so many bad things about the team, it’s for them,” he said.

Uruguay coach Oscar Tabarez said, “Suarez is a wonderful player. We admire him.”

Suarez has scored 41 goals in his 78 international caps for Uruguay. He was also this season’s English Premier League top-scorer with 31 goals.

In 2010 World Cup in South Africa, Suarez was sent off for his deliberate handball in the last seconds of extra-time. Ghana missed the resulting spot-kick and Uruguay eventually went through on penalties.

Today, Suarez said that the game against Italy would be another final and that the team would keep fighting until the end.