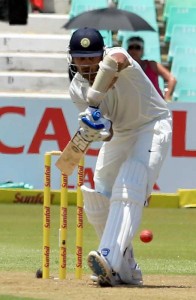 Opening batsman Murali Vijay got his maiden overseas Test century to guide India to a competitive 259 for four on the first day of the first Test against England at Trent Bridge here Wednesday.

Vijay was unbeaten on 122 and skipper Mahendra Singh Dhoni on 50 as India pulled back things in their favour in the third session of the game.

Opting to bat first, India made a good start scoring 106 runs in the first session.

But England struck back in the second by picking two quick wickets of Cheteshwar Pujara (38) and Virat Kohli (1) to leave India at 107 for three.

In the third and the final session, India lost the wicket of Ajinkya Rahane, who had worked hard for his 32, but Vijay and Dhoni took the visitors to a position of strength with their unfinished 81-run stand for the fifth wicket.

It wasn’t the classiest of the knocks from Vijay but nonetheless valuable and came at the right time for India, who are keen on putting behind the 0-4 whitewash they suffered on their last tour in 2011.

Vijay took 294 balls and struck 20 fours and a six in what was his fourth Test century. He was in sublime touch right from the word go and looked determined to improve his woeful average in overseas Tests.

Vijay and Shikhar Dhawan (12) started confidently on a pitch that offered little assistance to the pacers.

The first boundary came in just the third ball of the day, but in an accidental fashion. Vijay wanted to leave the delivery from Anderson but was late in pulling out and found an under-edge past the third slip for the first runs on board. The next two balls also were dispatched to the boundary by Vijay but in a much controlled manner.

But it didn’t take long for Anderson to taste success. In the seventh over, he just got it to deviate just enough to catch the edge of Dhawan’s bat and wicketkeeper Matt Prior plucked out a brilliant one-handed catch diving to his left.

Pujara fell to Anderson’s trap who was bowling with a silly mid-on. The ploy worked perfectly for Anderson as Pujara pushed at a delivery tentatively and Bell picked up a one-handed catch diving full length to his right.

Kohli went in the next over as he went forward to face Stuart Broad but the delivery straigthened after pitching and kissed the shoulder of the bat to second slip.

However, Vijay continued playing confidently at the other end. Rahane survived few nervous moments and close call but gave Vijay good company to help India recover from a precarious situation to reach tea at 177 for three.

Rahane, however, fell in the first over after tea as he tried to pull Liam Plunkett but the ball ricocheted straight to Cook at silly point.

From then on, Vijay and Dhoni played cleverly to take India to a position of strength to make sure that they start on a positive note.

Earlier, India dropped Rohit Sharma for all-rounder Stuart Binny, who will be making his Test debut while Ravindra Jadeja is the lone spinner. England included Ben Stokes in place of Chris Jordan.