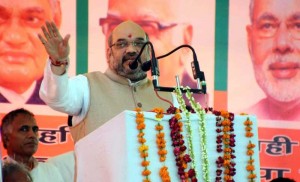 The two parties, which have been alliance partners for nearly 25 years, hit a rough patch over seat sharing for Oct 15 Maharashtra assembly polls.

Sources within the BJP said that Shah called Thackeray Monday morning, and said that the ties between the two parties should not break.

While the Bharatiya Janata Party (BJP) wants at least 135 seats to contest, Shiv Sena is not ready to offer anything more than 119 seats in the 288-seat assembly.

The last date for filing nominations is Sep 27.

BJP sources said Monday that they may soon decide on candidates.

Asked about the chances of the alliance breaking up, BJP spokesperson Syed Shahnawaz Hussain said: “The decision will be announced soon.”