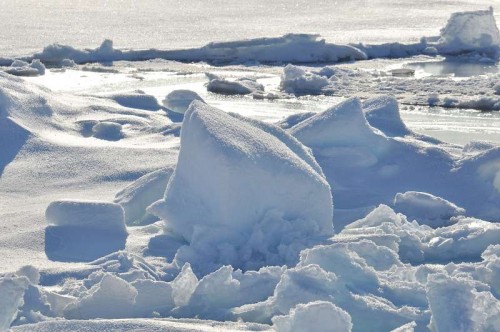 Using gravitational satellite data, researchers have found that during the past decade, Antarctica’s massive ice sheet lost twice its mass in its western portion compared to what it accumulated in the east.

The southern continent’s ice cap is melting ever faster, the researchers determined.

The researchers “weighed” Antarctica’s ice sheet and found that from 2003 to 2014, the ice sheet lost 92 billion tonnes per year.

Since 2008, ice loss from West Antarctica’s unstable glaciers doubled from an average annual loss of 121 billion tons of ice to twice that by 2014, the researchers found.

“With the rapidly accelerating rates at which the ice is melting, and in the light of all the other, well-publicised lines of evidence, most scientists would be hard pressed to find mechanisms that do not include human-made climate change,” said Frederik Simons, associate professor of geosciences, Princeton University and co-author.

“Compared to other types of data, the Princeton study shows that ice is melting from West Antarctica at a far greater rate than was previously known”, said first author Christopher Harig, research associate in geosciences, Princeton University.

Overall, ice-loss rates from all of Antarctica increased by six billion tons per year each year during the 11-year period the researchers examined.

In Antarctica, it’s the ocean currents rather than air temperatures that melt the ice, and melted land ice contributes to higher sea levels in a way that melting icebergs don’t.

As the ocean warms, floating ice shelves melt and can no longer hold back the land ice.

Harig and Simons developed a unique data-analysis method that allowed them to separate GRACE data by specific Antarctic regions.

“The notable feature of this research is the power of their method to resolve regions geographically in gravity data,” said Robert Kopp, associate professor of earth and planetary sciences, Rutgers University.

The study appeared in the journal Earth and Planetary Science Letters.