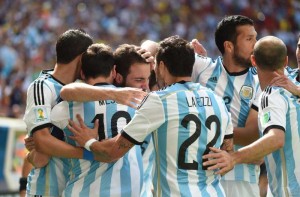 Argentina reached the semifinals of the FIFA World Cup, for the first time in 24 years, after a hard fought 1-0 win over Belgium at the Estadio Nacional de Brasilia here Saturday.

Gonzalo Higuain scored his first goal in this year’s tournament with a brilliant first time volley in the eighth minute and that turned out to be the difference between the two teams.

Argentina, who had last qualified for the World Cup semis in 1990 Italia where they lost to Germany in the finals, became the second South American to reach the last four after Brazil.

Belgium’s ouster means there could be two European countries and two South Americans in the final four.

Germany have already qualified after their 1-0 win over France Friday and the Netherlands could be the other, provided they beat Costa Rica in the last quarterfinal match later in the day.

It was a cagey affair with both teams finding chances at a premium.

Argentina looked more threatening on the break with Lionel Messi giving the opposition heartache as usual.

Belgium fans had expected a lot from Chelsea forward Eden Hazard before the start of the tournament but the former Lille star has been a big disappointment, failing to score even a single goal.

On Saturday, as well, Hazard had little impact on the game and seemed to be lacking any motivation.

Belgium lacked some creative spark in attack. Divock Origi was completely ineffective in the first half and the undoubted talent of Romelu Lukaku was missing.

Argentina lost key player Angel Di Maria early due to an injury but dealt well with the absence of the Real Madrid winger.

Argentine coach Sabella will be hoping, though he is not sidelined for a potential semi-final clash with the Netherlands or Costa Rica.

Argentina led thanks to Higuain’s sublime eighth-minute strike and, on the whole, it was a deserved advantage for the South Americans.

Belgium offered little in attack in the first half, but showed they were capable of keeping possession at times.

Argentina had five shots on target out of a total of six while Belgium managed to trouble Argentine goalie Romero just once from four attempts.

The second half went much the same way as the first with chances hard to come by.

Twenty minutes into the second half, Belgium certainly looked livelier, but chances to pull level remained few and far between.

For all the attacking flair in the team, Belgium failed to conjure clear cut chances against their South American rivals.

Time and again, attacking moves have broken down in the final third for Belgium.

As time ran out, Belgium made a string of changes and threw men forward.

This opened up counter attacking opportunities for the Argentines but Thibault Courtois was never really tested.

Argentina did come under a fair bit of pressure in the closing minutes but besides one or two incidents of panic defending, Argentina defence never looked like conceding.

Messi had a golden chance to settle the match right at the death but Courtois once again denied the Barca forward in a one on one situation.