Late lawyer and human rights activist Asma Jahangir has been awarded the UN Human Rights Prize for 2018. Her daughter Munizae Jahangir received the prestigious award on behalf of her mother…reports Asian Lite News 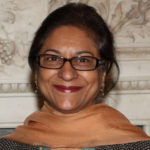 The award is given to individuals and organisations in recognition of outstanding achievement in human rights. Asma Jahangir was announced as one of the four winners of the quinquennial prize in October.

Receiving the award for her late mother, Munizae Jahangir dedicated it to Pakistani women and their courage. The ceremony was held at the UN Headquarters in New York.

Asma became the fourth Pakistani woman to be awarded the UN Human Rights Prize. Before her, Begum Ra’Ana Liaquat Ali Khan (1978), Benazir Bhutto (2008) and Malala Yousufzai (2013) had been accorded the honour.

Asma, who died in February, was known for her outspoken nature and unrelenting pursuit for human rights as well as for remaining undaunted in the face of extreme pressure and opposition.

She is also remembered as a champion of the disenfranchised and for her services towards building a democratic and more inclusive Pakistan.