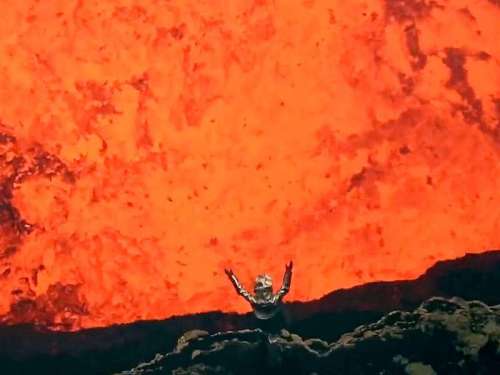 There were a couple of volcanic eruptions last week in Iceland and Papua New Guinea. Luckily for Canadian adventurer George Kourounis, this one did not erupt as he dropped himself into an active volcano for a jaw dropping selfie!

Currently known for his television series Angry Planet, Kourounis descended into the Marum crater – a boiling lava lake situated within the Ambrym volcano in Vanuatu to take a self-portrait.

Vanuatu, officially the Republic of Vanuatu, is an Oceanian island nation located in the south Pacific Ocean.

“Panorama shot from the top, looking down 1,200 feet to the Marum lava lake. The same height as the Empire State bldg,” Kourounis later tweeted.

Kourounis managed to snap a selfie before his camera melted, literally.

“The suit that protected me from the lava’s heat. It was destroyed by the potent acid rain on the volcano,” he wrote.