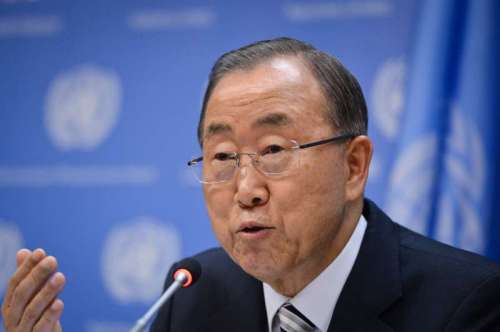 UN Secretary General Ban Ki-moon was recognized in New York by the South-South Awards for his role in leading the world’s efforts to combat climate change.

Susana Malcorra, the UN chef de cabinet to the executive office, accepted the recognition on behalf of the secretary-general at the 2014 South-South Awards reception, held Wednesday on the sidelines of the annual high-level debate of the UN General Assembly, Xinhua reported.

The 2014 ceremony, highlighting the cause of fighting climate change, is in support of the secretary-general’s commitment and efforts to address climate change.

The event came one day after the close of the UN Climate Summit, which, hosted by Ban, attracted a record breaking presence of more than 120 heads of state or government in a bid to raise ambition, mobilize resources, and generate action toward a universal climate deal next year in Paris.

Also praised at the Wednesday reception was Tuilaepa Malielegaoi, prime minister of Samoa, for his dedication and work on mitigating the impact of climate change on small island developing states.

Meanwhile, the government of Tajikistan was recognised for continuous efforts in promoting international cooperation in water-related areas.

The South-South Awards honour governments, organisations and individuals who have made significant contributions to advancing sustainable development in a bid to galvanise the international community in tackling climate change by affordable, creative and scalable solutions.

Also lauded was the Asia-Pacific South-South Steering Committee for Sustainable Development for its commitment in supporting the efforts of developing countries and highlighting the importance of South-South cooperation in addressing climate change.

John W. Ashe, president of the UN General Assembly at its 68th session, attended the ceremony.