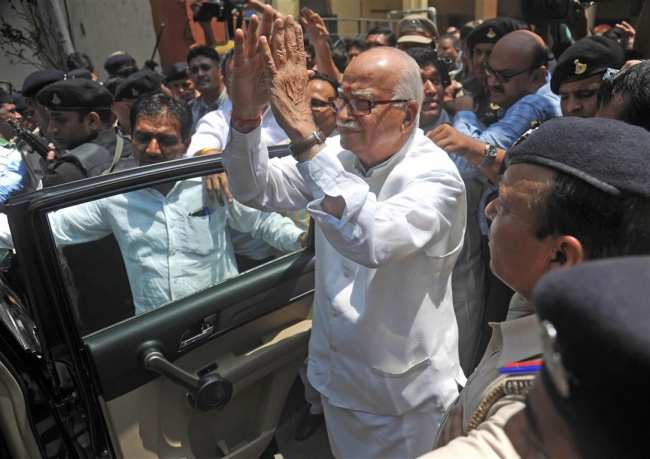 They anchored the rise of the BJP in the 1990s and guided it through the tumultuous years in the opposition but do not appear to have a role in the party’s first full-majority government. L.K. Advani and Murli Manohar Joshi, both past presidents of the party, now appear to have a largely ceremonial role in the Narendra Modi dispensation though they continue to command the respect of party workers.

Both Advani and Joshi are founding members of the BJP and were functionaries of its predecessor, the Jana Sangh. Advani and Joshi played a central role in the party’s sharp rise in the 1990s. Advani was deputy prime minister during the first NDA government but could not deliver victory when the BJP projected him as its prime ministerial candidate in the 2009 general elections.
Advani, a perpetual “yatri” who nursed prime ministerial ambitions till last year, is now a “guardian”, “patriarch” and “guide” to the BJP rank and file. Joshi, whose reports as chairman of the Public Affairs Committee kept the UPA-II government on the edge, is also seen to have an “advisory” role for the present.
A major reason for Advani and Joshi’s apparent isolation from governance in the second National Democratic Alliance government is the nature of the Bharatiya Janata Party’s victory in the April-May Lok Sabha elections under Modi’s stewardship. With the Rashtriya Swayamsevak Sangh, the ideological patron of the BJP, also keen to herald and sustain a generational change in the party, there appear to be limited options for the “seniors” in the party, including Advani, Joshi, Shanta Kumar and others.
At 86, Advani can still give a run for their money to leaders younger than him in terms of his alertness and fitness.

Joshi, 80, too is alert and quick-witted. Both are regulars in parliament during its sessions and sit in the front rows of the treasury benches.
Advani and Joshi continue to be members of the BJP’s parliamentary board, the apex decision-making body. Advani is also on the dais at all important party meetings, including that of the parliamentary party. But there appears little scope of his playing a
larger role in the NDA as Modi is the prime minister and, effectively, the leader of the alliance.
As the 2014 election came, Modi’s rising graph and popularity among the grassroots workers eclipsed any chance of the party again putting Advani at the forefront. He displayed strong reservations in the beginning but eventually reconciled to Modi’s elevation.

BJP MP from Bijnor Bhartendra Singh said that Advani’s role was that of “a guardian, role-model and patriarch.”

“As a founding member of the BJP, former deputy prime minister, former party president and one of the seniormost parliamentarians, he dwarfs others. His natural role is of a guardian. He certainly is the most influential member of the BJP in parliament.”

Advani’s accessibility, his stellar contribution to the party’s growth and humility are some of the reasons cited for the respect he commands from party MPs.

“If a minister does not address grievances related to my constituency, I can go and tell Advaniji and his word will have an impact,” a party MP who did not want to be identified told IANS.

The MP conceded that he can approach Advani more freely than Modi on any issue. Joshi, too, enjoys respect of the party MPs.

Poltical analyst and senior journalist S. Nihal Singh said that Advani now has a titular role in the party structure. “He has a titular role, an honorary role not amounting to much. He has had his innings and later conceded Modi’s supremacy. As far as leadership stakes are concerned, they are over,” Nihal Singh told IANS.

According to Subrata Mukherjee, a political analyst who taught at Delhi University, Advani’s role at the peak of the BJP largely ended with that of former prime minister Atal Bihari Vajpayee after the party’s defeat in the 2004 general elections.

He said political leaders should hand over the reigns to the second generation with a certain amount of grace. “In our political culture, we have not imbibed that. Political parties have not created procedures where leaders get elevated and retire. Politics is also played within a time limit,” he maintained.

Congress MP Saifuddin Soz said that Advani and Joshi had been the pillars of the party and they appear to be sidelined. “It appears there are fissures in the party and there will be a reaction though it may come late,” Soz told IANS.

Congress leader Mani Shankar Aiyar said that Advani was not in the BJP mainstream. “From his body language and his failure to comment on certain things I think that he is very disapproving of Modi and his cohorts,” Aiyar told IANS.

“Modi does not want to bring Advani into the mainstream and Advani is too dignified a person to push himself,” he added.