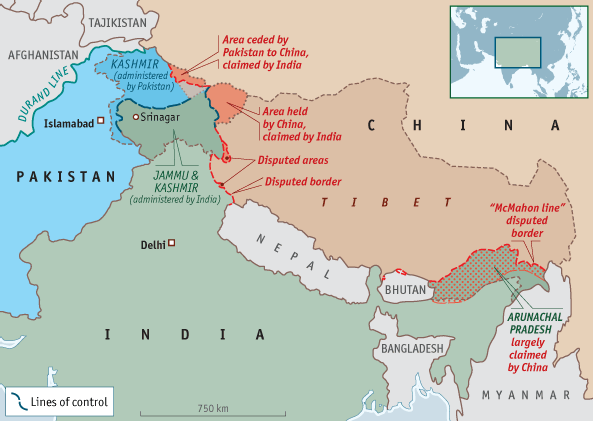 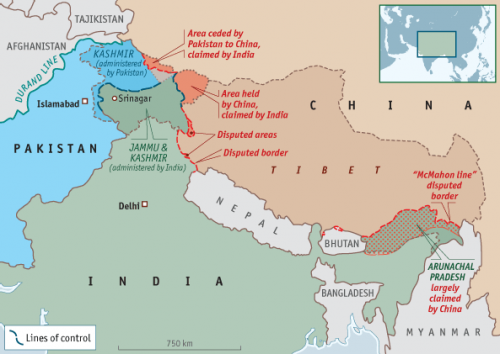 Recent transgressions by Chinese troops in the northern border areas of India and the protest note by the Chinese foreign office on road building in Arunachal Pradesh have again highlighted the fact that the Sino-Indian boundary issue remains to be settled, despite negotiations for nearly half a century.

There is no other country in the world that has longer contiguous borders than China – a total of 22,000 km with 14 states (13 according to India, as New Delhi does not recognize China’s border with Pakistani Kashmir that it says was illegally ceded to Beijing). All the countries that have a common border with China, except India and Bhutan, have arrived at a settlement with Beijing. Therefore, the question that arises is: what are the reasons why there is no settlement with India?

Many in India would find it paradoxical that after the Nehru-Zhou Enlai exchanges, official level talks in 1960 and a series of negotiations beginning with secretary-level talks in 1981, Joint Working Groups and special representative-level talks, there is yet no solution. Even meetings at the highest level – former prime minster Manmohan Singh met his Chinese counterparts 36 times over 10 years and Prime Minister Narendra Modi, in just four months, has already met Chinese President Xi Jinping twice — and yet there is no forward movement. The only plausible inference that can be drawn is that there is more to the boundary issue than a simple drawing of lines.

Within the Indian leadership it was former prime minister Indira Gandhi who first realized that it would be an “over simplification” to regard poor relations with China as a result of a border dispute and that Chinese policy on the border row was a result of a more “complex policy” that required a much more sophisticated and a broad-based approach. Gandhi was conscious that poor relations with China hemmed in India and limited her foreign policy choices.

Over the years, Indian policy has been pragmatic. From denying, under Nehru, that a dispute existed, to stating that till the dispute was settled there could be no forward movement in relations, to Rajiv Gandhi’s assertion that we could develop relations side by side with the boundary negotiations, the Indian position progressed quite significantly.

Former prime minister Atal Bihari Vaypayee went even further and agreed with his Chinese counterpart that the boundary settlement could be explored “from a political perspective”, thus abandoning Nehru’s stance that the Sino-Indian boundary was established by “treaty, custom and usage”. Finally, in Article III of the Political Parameters and Guiding Principles Agreement, signed in April 2005, Manmohan Singh accepted a “package settlement” and “adjustment of its position” on the boundary issue.

So with India having moved so far, why then does China not agree? Apart from a boundary settlement China also refuses to come to an understanding on a mutually agreed Line of Actual Control to avoid any transgressions on the border.

Present-day Chinese strategists, while referring to the boundary dispute, also make it a point to emphasize that China-Pakistan, Tibet and the Dalai Lama and India’s propensity to seek enhanced strategic and security links with countries of East Asia, under the aegis of US “re-balancing” towards Asia, are important factors that China takes into account while determining policy. What worries them is that India may abandon its strategic autonomy and ally with the US to “contain” China.

They discern that a growing number of Indian strategists as well as large sections of influential Indian media are promoting the case for alignment with the US. In the Chinese mind, the link between a boundary settlement and these strategic factors is therefore well established. On each of these issues, China first seeks satisfaction.

China continues to heavily arm Pakistan. In 2008-12, according to SIPRI, China’s global exports of arms rose an unprecedented 162 percent, of which 55 percent went to Pakistan. China has facilitated Pakistan’s nuclear ambitions, helping it to develop the world’s fastest growing nuclear arsenal.

Tibet remains for China an area of uncertainty. With an ageing Dalai Lama, China is uncertain of a future dispensation and would require India’s help to keep the issue under manageable proportions.

Therefore, ever since the boundary issue came to the fore and even at present, this issue is utilized by China for trying to coerce foreign policy changes by India that often have nothing to do with the dispute itself. It did so in 1965, 1967 and 1971. China has used the threat of intrusions across the LAC, as a part of coercive diplomacy, in order to influence decisions in a way most desirable for it.

And that is also the principal reason why China does not desire an early conclusion, except perhaps completely on its own terms. It is too valuable a coercive diplomatic asset to give up.

As an article in the Hong Kong-based newspaper Wen Wei Po put it, “while New Delhi was quick to express hope to see both sides try harder to resolve their border dispute, China has implemented a policy of good neighbourliness and incessantly extended its hand of friendship to India. India has adopted a mega-strategy of restraining China with the United States on the one hand and imposing economic and trade restrictions on the other. In this situation China does not need to rush for a quick solution to its boundary dispute with India”.

In other words, logic would suggest that a boundary settlement is only possible if India were to remain within the ‘red lines’ drawn by China.