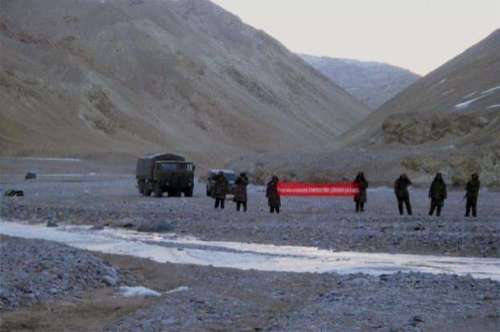 The entry point this time is different from the last intrusion which occurred during Chinese President Xi Jinping’s visit to India. According to army sources, Chinese soldiers withdrew from Chumar late Thursday night, only to return after few hours Friday.

Sources said Indian Army held its position even after Chinese soldiers withdrew in significant numbers. Nearly 35 Chinese personnels are presently camping at a hillock in the same area.

Chumur is located more than 300 km northeast of Leh and borders Himachal Pradesh. Several attempts at incursions have been made by China in this area.

According to the sources, the Chinese soldiers arrived in a vehicle and positioned themselves barely 100 metres away from the Indian Army.

Indian Army has a observation post in Chumar, which gives India an advantage in monitoring the Line of Actual Control (LAC).

Chinese helicopters have been air dropping food packets for its soldiers.

Tension in the area started when Chinese workers constructing a road on their side started entering the Indian territory claiming orders to build road upto Tible, which is five km inside Indian territory.

Both leaders have also agreed to settle border issues as soon as possible.