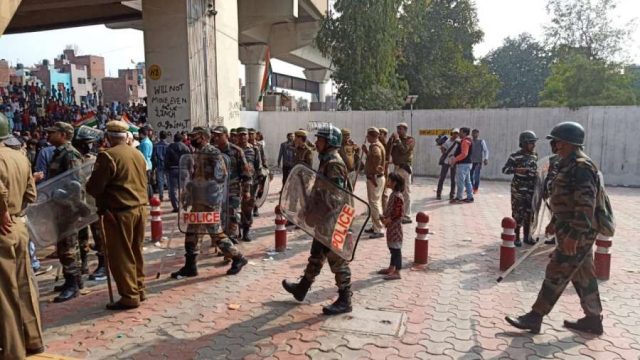 Fearing violence, the police has stopped all unnecessary movements in Jaffarabad, Maujpur and Babarpur areas. Barricades have been set up on the main roads. The movement of pedestrians along with vehicles on the roads has also been regulated…reports Asian Lite News

Several incidents of violence and stone-pelting continued in northeast Delhi on Tuesday. The police and Rapid Action Force have been deployed in Maujpur, Babarpur, Jaffrabad, Gokulpuri, Brijpuri, etc. However, in many interior areas, stone-pelting incidents continued. According to the locals, unruly mobs have tried to set several two-wheelers on fire in these areas.

In the Brahmapuri area adjoining Maujpur, stone pelting occurred again on Tuesday morning. Small groups of miscreants were seen throwing stones at the police and commoners. However, due to the presence and vigilance of police, they failed to spread mass violence. Minor incidents of violence have also been reported from the interiors of Jaffarabad, Maujpur and Babarpur.

Fearing violence, the police has stopped all unnecessary movements in these areas. Barricades have been set up on the main roads. The movement of pedestrians along with vehicles on the roads has also been regulated. Simultaneously, the armed personnel of the Delhi Police Rapid Action Force and paramilitary forces have been deployed in large numbers on both sides of the road.

Raja, a resident from Babarpur, told IANS: “Violent clashes took place outside our locality on Monday for three hours. Most of the miscreants had come from other neighbourhoods. They were carrying lathis and iron rods.” According to Raja, many residents came together and drove away the miscreants from the streets.

As compared to the situation on Monday, Babarpur was peaceful on Tuesday. Although, the local people living here started gathering at street intersections since morning, they said they will not flock on to the main roads, but will cooperate with the police in maintaining security.

A petition has been moved in the Delhi High Court seeking independent judicial inquiry, compensation for the deceased and arrest of political leaders for inciting violence in north-east Delhi.

A large swathe of north-east Delhi — Jaffrabad, Maujpur and Gokulpuri — remains tense following clashes between pro and anti-CAA groups resulting in the death of seven people, including a head constable.

The petition, filed by activist Harsh Mander has sought arrest of BJP leader Kapil Mishra, Anurag Thakur and Parvesh Verma and their prosecution in accordance with law.

Additionally, he has requested the court to constitute a Special Investigating Team (SIT) headed by officers from outside the national capital to probe the matter.

It also sought a direction to the Central government to deploy the Army to control law and order situation in the affected areas.

The petition wants a a retired judge to “inquire into communal attacks” and compensation to the families of those killed in the violence.

“For a writ of mandumus, direct the respondents to preserve the evidence and CCTV footage of all cameras in and around the protest site,” the plea stated.