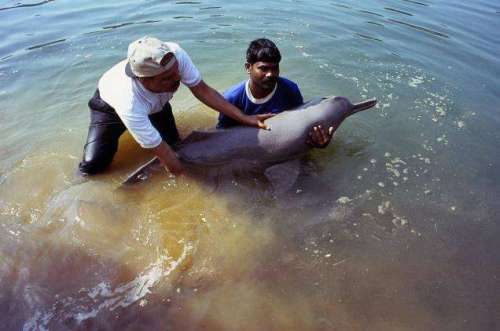 The discovery of a new fossil of dolphin species belonging to an extinct family of dolphins has shed light on the history of the endangered Ganges and Indus river dolphins living today.

It belongs to the rare squalodelphinids, small to medium-sized dolphins — until now found only in a few localities in Argentina, France, Italy and the east coast of the US.

“The new species named Huaridelphis raimondii increases the known diversity of squalodelphinids and help shed light on their relationships,” said Olivier Lambert from the Royal Belgian Institute of Natural Sciences in Brussels.

They belong to the early Miocene period (23-16 million years ago).

River dolphins are a bizarre group of cetaceans (marine mammals) in that they reside in freshwater rivers and estuaries, though their ancestors were marine.

As a result of life in muddy river water, some are functionally blind and have very small dorsal fins.

Despite similar appearances, the South Asian river dolphins (Platanista spp.) of the Ganges and Indus rivers are only distantly related to other river dolphins of the Amazon and Yangtze rivers.

For the past 30 years, many fossil cetacean species were described based on material from the Pisco Basin (a desert on the coast of Peru).

“Considering the richness of the fossil localities recently discovered, other new extinct dolphins from the same geological age will certainly soon be found and studied,” informed Giovanni Bianucci from the University of Pisa, Italy.

The paper appeared in the Journal of Vertebrate Paleontology.