Israel and the Palestinians have begun a fresh five-day ceasefire in Gaza, agreed at the end of a three-day truce. As the ceasefire was announced, Israel launched air strikes in response to alleged rocket fire from Gaza, the BBC said. 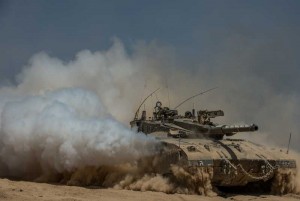 “There were no more reports of violence overnight, and the two sides were expected to continue indirect talks mediated by Egypt in Cairo. The Israelis launched a military operation in Gaza on 8 July to stop militant attacks from Gaza. Hamas, which controls Gaza and is involved in the Cairo talks, has denied its members launched rockets at Israel on Wednesday night, the report.
Israeli military spokesman Peter Lerner said on Twitter: “No need to jump to conclusions. I don’t know who launched 10pm (19:00GMT) rocket at Israel.” There was no immediate report of casualties from either side. The current ceasefire began on Monday, and has now been extended for five days, the report added.
Palestinian sources tolf the BBC the truce extension will create a window for further negotiations. But the BBC’s Kevin Connolly in Gaza says future talks are likely to be forbiddingly difficult.