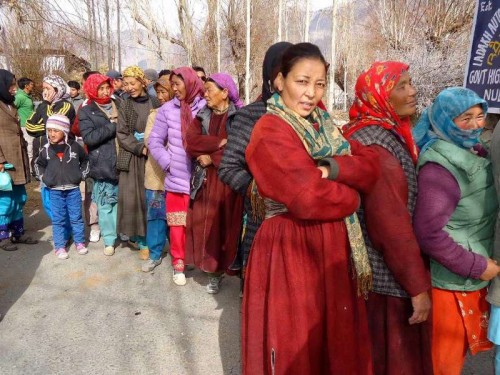 The fourth phase of the Jammu and Kashmir assembly elections Sunday may well decide who will be the dominant player in the Kashmir Valley — the ruling National Conference or the PDP.

Some 14.73 lakh voters in 18 constituencies will be eligible to decide the fate of political heavyweights like Chief Minister Omar Abdullah and former chief minister Mufti Muhammad Sayeed.

The constituencies are spread over four districts of Srinagar, Anantnag and Shopian in the Muslim-majority valley and Samba district in Hindu-majority Jammu region.

Of these, eight are in Srinagar district, six in Anantnag, two in Shopian and two in Samba district.

Omar Abdullah is contesting from Sonwar in Srinagar and Sayeed from Anantnag.

Mubarak Gul, speaker of the outgoing assembly and National Conference leader, is seeking re-election from Idgah in Srinagar district.

Another National Conference leader and minister in the fray is Ali Muhammad Sagar, who is seeking re-election for the fourth time from Khanyar, also in Srinagar district.

In the outgoing assembly, nine of the 18 seats were held by the National Conference, six by the Peoples Democratic Party, two by the Congress and one by the Panthers Party.

For the National Conference and its principal challenger the PDP, the key to future power in Jammu and Kashmir is largely believed to lie in the fourth phase.

The prospect of who governs Kashmir depends chiefly on which of these two rivals is able to make inroads into each other’s political strongholds.

This in turn will largely decide who gets the controlling stakes in the next assembly.

It is generally agreed that no single party will get a majority on its own in the 87-member legislature.

To ensure free and fair polls, the Election Commission has deputed macro and micro observers in addition to webcasting, videography and deployment of flying squads for the fourth phase.

A total of 1,890 polling stations have been set up for Sunday.

Following intelligence inputs that separatist guerrillas might try to disrupt the democratic process, 500 companies of paramilitary forces would be deployed to protect voters and the election staff.

These would be in addition to the already deployed Central Reserve Police Force (CRPF) and Jammu and Kashmir Police, an official told IANS.

Polling starts at 8 a.m. and ends at 4 p.m. After five rounds of polling, the votes will be counted Dec 23.