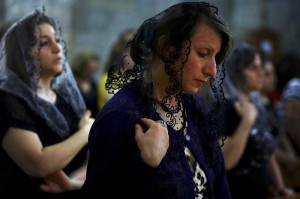 The French government has said that it was ready to welcome Christians fleeing from Iraqi city of Mosul which is now controlled by militants of the Islamic State, media reported Tuesday.

Islamic State had ordered Christian families to convert to Islam or leave the city.

Those who failed to comply were threatened with execution.

“France is outraged by these abuses that it condemns with the utmost firmness,” French Foreign Minister Laurent Fabius and Interior Minister Bernard Cazeneuve said in a joint statement Monday.

“The ultimatum given to these communities in Mosul by the Islamic State is the latest tragic example of the terrible threat that jihadi groups in Iraq pose to these populations that are historically an integral part of this region,” they said.

“We are ready, if they wish, to facilitate their asylum in France.”

“We are in constant contact with local and national authorities to ensure everything is done to protect them,” the two ministers said.

The UN Security Council has condemned this step taken by the militant group, saying that such actions could be considered as war crimes and against humanity.

Before the US invasion in 2003, more than one million Christians lived in Iraq, including 60,000 in Mosul.