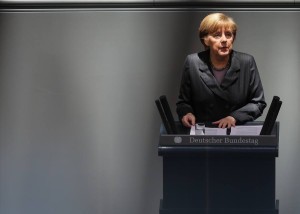 The German government Thursday decided to deport a representative of the US intelligence agencies in Berlin in view of the emerging US spy row.

The representative of the US intelligence agencies at the US embassy in Berlin was asked to leave Germany, Seibert said.

The German Parliamentary Control Panel, which oversees German intelligence services, held a special meeting earlier in the day to deal with the latest reports of a German double-agent and US spying in the German defence ministry.

The decision to expel the US representative was made in “response to a failed cooperation in efforts to clarify the US monitoring cases”, panel chairman Clemens Binninger was quoted by German media N-TV as saying.

The move comes amid reports of two cases of suspected American espionage in Germany over the past week and a longer dispute over alleged US National Security Agency (NSA) eavesdropping reports Sky News.

German government spokesman Steffen Seibert said on Thursday: “The representative of the US intelligence services at the United States embassy has been asked to leave Germany.

“The request occurred against the backdrop of the ongoing investigation by federal prosecutors as well as the questions that were posed months ago about the activities of US intelligence agencies in Germany.