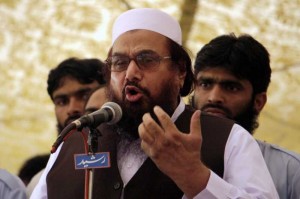 Amid a raging row, the government said Tuesday that it had nothing to do with yoga guru Ramdev’s aide Ved Pratap Vaidik’s meeting with Pakistani terrorist Hafiz Saeed in Lahore.

Both in the Lok Sabha and Rajya Sabha, senior cabinet ministers distanced the government from Vaidik even as the latter claimed that he met Saeed as a journalist.

External Affairs Minister Sushma Swaraj told the Lok Sabha: “Categorically and unequivocally, I would like to state that the government has nothing to do with Vaidik’s trip to Pakistan or his meeting with Hafiz Saeed there.

“Neither before going to Pakistan nor after reaching there did he inform us that he is meeting Saeed… It was purely a private trip and a personal meeting,” she said.

Finance Minister Arun Jaitley reiterated in the upper house that the government had “nothing to do with the meeting”.

Before parliament met, Gandhi set the tone by saying his party was “curious” to know whether the meeting between Vaidik and 26/11 mastermind Saeed was facilitated by the Indian embassy in Pakistan.

“The question is whether the Indian embassy facilitated this event… Whether they helped this gentleman (Vaidik) in any way,” Gandhi told the media.

He said it was a “known fact” that Vaidik was linked to the Rashtriya Swayamsevak Sangh.

Vaidik insisted for a second consecutive day that he met Saeed — who is known to have close ties with the Pakistani intelligence — as a journalist and he (Vaidik) was not linked to any political party.

“I met him as a journalist. All doors are open for me. I am not close to anyone or any party. I am known as the greatest opponent of the Congress.”

Terming Gandhi’s stand as “bogus”, he added: “The Congress is associating me with the government so that they can attack them through me.”

As soon as the Lok Sabha met, Congress members shouted slogans demanding an explanation from the government.

Speaker Sumitra Mahajan asked the opposition to give a notice for a discussion and refused to suspend the question hour.

Amid the din, Home Minister Rajnath Singh and Parliamentary Affairs Minister M. Venkaiah Naidu said the government was ready to discuss the meeting.

The Lok Sabha was adjourned twice over the issue. Similar scenes were witnessed in the Rajya Sabha.

Leaders from the Congress, Left, Janata Dal-United and Trinamool Congress created a ruckus in the upper house, forcing two adjournments before noon.

“Vaidik told Saeed that Kashmir should be separated from India,” Azad said.

Vaidik insisted that this was not true and it would be “foolishness” to think of Jammu and Kashmir’s separation from India.

Information and Broadcasting Minister Prakash Javdekar said while the Congress had a right to raise issues, disruptions of parliament cannot be the norm.