British Minister for the Middle East Tobias Ellwood expressed “disappointment” at the mass executions in Saudi Arabia, saying Britain will continue to raise these cases with the Saudi authorities.

“I am deeply disturbed by the escalation in tensions in the last 24 hours in the Middle East,” Ellwood said in a statement.

“The UK is firmly opposed to the death penalty. We have stressed this to the Saudi authorities and also expressed our disappointment at the mass executions,” he noted.

“We have discussed with the authorities in Riyadh, and expect that Ali Al-Nimr and others who were convicted as juveniles will not be executed. The UK will continue to raise these cases with the Saudi authorities,” the minister added.

“We are deeply concerned to hear of the attack yesterday on the Saudi Embassy in Tehran. It is essential that diplomatic missions are properly protected and respected,” he urged.

He continued that there are “those who will wish to exploit the situation and raise sectarian tensions higher.”

“This would be against the wishes of the vast majority of those in the region. I urge all parties in the region to show restraint and responsibility,” said the minister.

He accused the Iranian authorities of not taking any measure to prevent the attacks against the embassy in Tehran and the consulate in the Iranian city of Mashhad.

The attacks on the embassy were a violation to the international agreements, the minister said, also referring to the Iranians’ previous attacks on the US and British embassies.

He also accused Iran of providing protection for Al-Qaeda through weapon trafficking.

Bahrain on Sunday “strongly condemned” the attacks on the Saudi Arabian embassy in Tehran, urging Iran to abide by diplomatic measures and control the protesters.

Bahrain’s Foreign Ministry called the attack on the Saudi embassy “demagogic and barbarian actions” which is a “flagrant violation of international doctrines and norms.

It urged Iran to provide “required protection to diplomatic premises and staff, as well as adopting deterrent legal measures against rioters.”

Bahrain supports the Saudi measures towards consolidating peace and stability at both regional and international levels, the ministry reiterated.

Saudi Arabia executed 47 people on Saturday, including 45 Saudis, an Egyptian and another man from Chad. The incident is widely viewed as the largest contemporary mass execution for security infractions.

Bahrain’s Interior Ministry has already cautioned that legal steps will be taken against anyone attempting to take advantage of the recent verdicts in Saudi Arabia to magnify sectarian tension or incite violence.

The authority has already detained several rioters who illegally abused social media, and also summoned and counseled some parents to protect their children from further incitement. 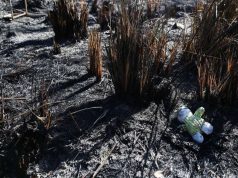