India were fined for maintaining a slow over rate during the fifth and final Test against England at The Oval here Sunday, the International Cricket Council (ICC) said Monday. 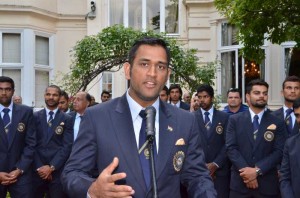 Match referee Ranjan Madugalle imposed the fines after Mahendra Singh Dhoni’s side was ruled to be three overs short of its target at the end of the match when time allowances were taken into consideration.The penalty was accepted by India without contest so there was no need for a hearing, the ICC said in a statement.In accordance with ICC Code of Conduct for Players and Player Support Personnel regulations governing minor over-rate offences, players are fined 10 per cent of their match fees for every over their side fails to bowl in the allotted time, with the captain fined double that amount.As such, Dhoni was fined 60-per-cent of his match fee while his players received 30-per-cent fines. If Dhoni is found guilty of one more minor over rate offence in Tests over the next 12 months, he will receive a one-match suspension as per the provisions of the ICC Code.