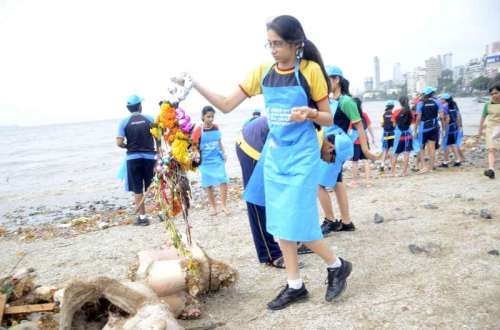 From photo competitions to cleanliness drives at schools and historic monuments, the government is exerting in every way to make Prime Minister Narendra Modi’s call for Swachh Bharat, or Clean India, mission a success.

As a prelude to the campaign’s formal launch by Modi on Gandhi Jayanti Oct 2, many central government ministries, schools, and corporates have initiated unprecedented cleanliness drives.

To be kicked off from India Gate by Modi on Oct 2, the campaign aims to achieve a completely clean India by Oct 2, 2019, to mark the 150th birth anniversary of Father of the nation.

The mission intends to reach out to all sections of the society – through various mediums – to make their environs clean and inculcate a feeling of hygiene and cleanliness.

Many ministers like Smriti Irani (human resource development), Shripad Yesso Naik (culture) and Ravi Shankar Prasad (law and justice) themselves wielded a broom, under the glare of cameras, and launched the drive.

The ministry of information and broadcasting (I&B) has initiated a Swachh Bharat Cleanliness Photo Contest, until Oct 15.

The best pictures will also be given cash prizes worth Rs.10,000, Rs.7,000 and Rs.5,000 and certificates of appreciation. The ministry has also initiated an animation and video contest on the theme of ‘Swachh Bharat’. The first prize in this competition is Rs.30,000.

“For the purpose of this contest, please make animation/short videos depicting the essence of Swachh Bharat,” a ministry advertising said.

“We have developed green cityscapes for you and now it’s your turn to keep it clean and green,” the DDA said in an advertisement.

Joining the movement is superstar Amitabh Bachchan, who will be launching a nationwide campaign ‘Banega Swachh India’ Sunday, as part of an initiative by a media house.

Also, the Central Board of Secondary Education (CBSE) has announced an expression series on Mahatma Gandhi and sanitation Oct 2-15, where school students can submit posters, essays, role plays and even poems on specific topics.

The logo and slogan for the five-year mission which shows a pair of spectacles of the kind worn by Mahatma Gandhi with the words “clean” and “India”, and the slogan “One step towards cleanliness”, was launched here Thursday.

Pledging support, corporates have also made monetary commitments to build toilets in schools.

The government has roped in various agencies like municipal bodies, religious and spiritual organisations and letters have been written to all parliamentarians and state governors.