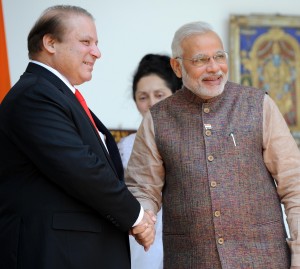 India  said there was “no structured meeting” planned between Prime Minister Narendra Modi and his Pakistani counterpart Nawaz Sharif.

“We (have not planned) any structured meeting between our prime minister and the Pakistani prime minister simply because we have not received a request to that extent,” Indian ministry of external affairs spokesman Syed Akbaruddin said.

Both prime ministers are here for the two-day Saarc Summit that began Wednesday.

Akbaruddin said Modi will have a series of bilateral meetings where he will “discuss substantive issues with each of our Saarc colleagues”.

“It will be substantive meetings and the outcomes of the meetings will be shared following their completion later in evening,” he added.

He also said that the inaugural session of the Saarc summit was an opportunity for the prime minister to lay-out the vision of what he feels should be the approach for the regional development and regional cooperation in South Asia.

“He (Modi) listed out his priorities right from connectivity to cultural cooperation to using science and technology for the benefit of all our citizens. He also emphasised on the evil of terror and how it impinges on our societies.”

On Modi’s statement on 26/11, Akbaruddin said: “The issue was bound to be raised as it is important. We are not going to forget what happened. We will pursue this issue. This is a matter high on our agenda.”

Earlier at the summit, Modi said: “Today, as we remember the horror of the terror attack in Mumbai in 2008, we feel the endless pain of lost lives.”

“Let us work together to fulfil the pledge we have taken to combat terrorism and trans-national crimes,” the prime minister added.