Authorities in Pakistan and India are struggling to cope with raging monsoon floods which have killed more than 460 people, displaced nearly a million people, and still threaten many more, according to Guardian. 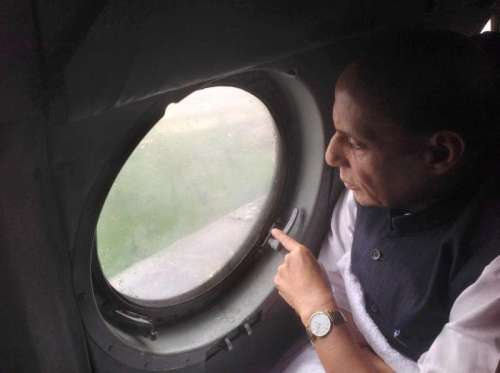 Pakistani military specialists blew up dykes with explosives to divert water from rivers running close to three cities, while Indian authorities admitted that relief efforts had not yet reached about 300,000 people in Kashmir. Local people, aid-workers and medical staff in the Indian-administered parts of Kashmir criticised the relief effort, which they called “inadequate and chaotic”, according to the report.

One aidworker based in Srinagar, a city of one million people, said the coordination between the Indian military, local authorities and NGOs had been “almost nonexistent”.

Valay Singh, of Save the Children, told Guardian that at least 50,000 people were living in community-run relief centres, mainly mosques and Sikh temples. “People who are rescued have next to nothing, as of now. They need shelter, food, medicines clothes. There’s no consolidated list of the rescued people in the relief camps. There is an urgent need to compile lists as it will help in identifying people displaced by the floods and help them in reuniting them with their families.”

“More than 200 people have been killed in Srinagar and bodies have reportedly been seen floating in the streets. Police said some residents of the city had been trapped in the top floors of their homes since heavy rains caused the Jhelum river to surge last week,” the report said.

Mohammad Farhan Malik, a volunteer doctor in Srinagar described a chaotic situation in the city. “There are over 20,000 people here [at one large mosque]. Most people are suffering from conjunctivitis, stress, gastroenteritis. We fear an outbreak of cholera. We have to be prepared for the worst. There are just eight to 10 doctors working … but the government hasn’t set up any proper health camp.”

Water levels in Kashmir have started to drop, but the extent of destruction in more remote areas remains unclear.

“There are some villages where everything has been swept away. People are extremely angry, frustrated and exhausted,” said R K Khan, an Indian police official.

The Indian air force announced on Thursday night that it had been forced to scale back operations after angry survivors pelted helicopters with stones. Most communications networks in Kashmir had failed and only 20% of the population had clean water supplies, reports in India said.

“The Jhelum river flows from Indian Kashmir to the Pakistan side, then down into the flat fertile lands of Punjab. The two embankments destroyed by the army on Thursday were near the cities of Muzaffargarh and Multan. The new breaches flooded farmland and small villages.

The disaster, caused by heavy rains over the last eight days, has so far forced more than 700,000 people to flee their homes in Pakistan. Some chose to remain to protect their property and land only to end up being trapped on what few high positions they could find,” the report said.

“We sat on roofs for three days waiting for help,” said Allah Wasaee, a mother of 10 children, from a village near Jhang city. “Even the women climbed up into the trees to escape the water.”