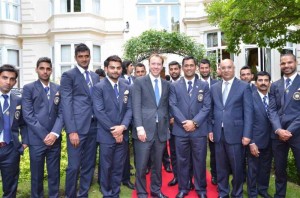 Ajinkya Rahane’s maiden century and his century-run stand with Shikhar Dhawan powered India to a comprehensive nine-wicket win over England in the fourth ODI here Tuesday and also sealed the series 3-0 with still a match to go.

The England batting collapsed yet again as they were bundled out for 206 runs with three balls to spare after being put into bat at Edgbaston.

India polished off the total in just 30.3 overs as Rahane struck 106, that included 10 fours and four sixes, and Dhawan remained unbeaten on 97. The duo added 183 runs for the first wicket.

Rahane and Dhawan ripped apart the England bowling and showed there were no devils in the pitch.

The 150-run stand came quicker than a run-a-ball. Rahane got his maiden ODI century in 96 balls and their 183-run stand ended when Rahane sliced Harry Gurney to Alastair Cook.

Dhawan, who hit 11 fours and four sixes, then took the team home safely and sealed the victory by hitting Gurney for a six over mid-on.

The win will help India ease the pains of the humiliating 1-3 loss in the Test series.

The first ODI in Bristol was washed out while India won the second ODI in Cardiff by 133 runs via the Duckworth Lewis method and the third in Nottingham by six wickets.

In Cardiff and Nottingham, it were the Indian spinners, who did the damage. But here at Edgbaston, England batsmen crumbled against Indian pacers.

But the pick of the Indian bowlers was pacer Mohammed Shami, who got three for 28, and left arm spinner Ravindra Jadeja who got two for 40.

With England strugging at 23/3, Eoin Morgan (32) and Joe Root (44) put on 80 for the fourth wicket, but they both fell to the spinners in quick succession.

Jadeja had Morgan caught at leg gully while Root failed to execute a reverse sweep off Suresh Raina and was caught at short third man.

Moeen Ali provided a late spark with a quickfire 67 off 50 balls, hitting four fours and three sixes, but was soon losing out of partners.

But Shami struck to remove Buttler, who was trapped lbw, while Chris Woakes (10) was run out.

Ali was finally castled by Ravichandran Ashwin in the 47th over, and England were bowled out three balls short of their full quota of 50 overs.

The last four wickets fell for just 12 runs as England were lucky to get past the 200-run mark.