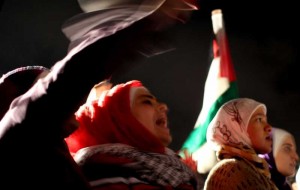 The government Monday said its policy on Palestine remains unchanged and rejected calls for a parliament resolution on the violence in Gaza where more than 500 Palestinians have been killed in Israeli military attacks since the past fortnight.

External Affairs Minister Sushma Swaraj, in her reply to a debate on the Gaza violence, said the need of the hour was to support the Egypt-backed ceasefire proposal.

India, she told the Rajya Sabha, desired good relations with both Israel and Palestine.

More than 500 Palestinians have been killed and over 3,000 injured in Israeli military attacks on suspected hideouts of the Hamas militant group that has fired rockets into Israel.

Sushma Swaraj dismissed opposition charges that the government was silent on the issue, saying it had reacted to the Gaza bloodshed at the BRICS summit in Brazil.

In a jibe at CPI-M’s Sitaram Yechury, Sushma Swaraj said that in 2008, the violence in Gaza claimed the lives of 1,400 Palestinians and asked if the Marxists withdrew support to the Congress-led government.

Sushma Swaraj said all Arab states were for peace in the region.

“The emphasis of the house should be to condemn incidents of violence everywhere in the world and to support the Egyptian-initiated ceasefire… This should be the stance of the house, of parliament and government,” she said.

Deputy Chairman P.J. Kurien declined to allow a resolution saying the rule under which the debate was held does not allow for a resolution of any kind.

Earlier, initiating the debate, Leader of Opposition Ghulam Nabi Azad said the Gaza Strip was being attacked from all sides and questioned if India’s foreign policy has changed.

“Has the foreign policy of India changed? The policy that was there in Jawaharlal Nehru’s time, Indira Gandhi’s time, Atal Bihari Vajpayee’s time, has that changed?” Azad asked.

Azad also said half of India’s remittance from foreign countries comes from West Asia. “Let us condemn the attack and pass a resolution,” he said.

Congress leader Anand Sharma said India’s lack of response to the conflict “should be a matter of concern”.

D. Raja of the Communist Party of India said India should be on the side of Palestine.

“India was one of the first countries to support Palestine, why should we keep distance now?”

“India must suspend the purchase of arms from Israel and we should strongly condemn the attack and pass a resolution,” he said.

Majeed Memon of the Nationalist Congress Party said: “We may have some interest in the Israel government but silence in this case will be culpable. We must express our anguish and pass a strong worded resolution.”

The Bharatiya Janata Party’s Anil Dave in his remarks said: “There is Syrian civil war, Sudan, North Mali, Central Africa Republic conflict. We must debate on world peace, we must always think global and in totality, we are the country of Gandhi and Buddha.”

The debate, which was listed in the upper house last week, was stalled after the government said it did not want a debate on Gaza.

Later, after the chairman gave the go-ahead, the government agreed to take up the debate Monday.

The UN Security Council has called for an immediate ceasefire in Gaza.