It’s a 50×1.5 metre canvas that took Melbourne-based, Kerala-origin Sedunath Prabhakar 18 months and AUS$7,000 to create as a tribute to 50 Australian greats, both living and dead, thereby bringing alive the country’s history. It is set to be unveiled next month.
“Through my 50 portraits, I wanted to narrate the history of Australia. The exact date and the venue of a two-week-long exhibition where my painting will be displayed would be decided soon. It is for the first time such an exhibition is being held in Australia,” 40-year-old Prabhakar  said over the phone from Melbourne.

“I first sketched the person and then used the acrylic medium to paint. In all, it took me 18 months from start to finish, which included research on selecting the 50 eminent Australians who should be portrayed,” said Prabhakar. 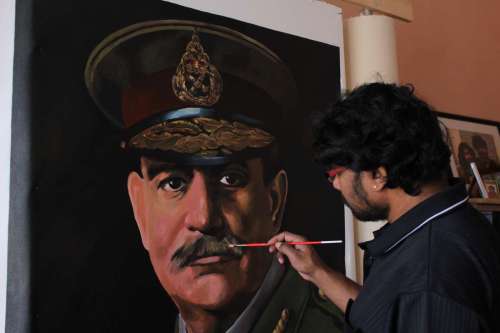 Hailing from Kidangoor in Kottayam district, Prabhakar graduated in fine arts from the prestigious Baroda School of Arts in 1998 and migrated to Melbourne in 2008 along with his wife, who is now a social worker.

“It cost me more than 7,000 (Australian) dollars for the material, besides my time. It took me around three to four days for each portrait,” said Prabhakar who takes classes in painting, as also Carnatic music, which is a passion with him.

Speaking to Thiruvallam Bhasi, editor of a Malayalam magazine published from Melbourne, said that Australian Prime Minister Tony Abbot, at a meeting of editors in August, was so happy on being told of Prabhakar’s effort that he put his arm around him and congratulated him.

“The Federation of Indian Associations of Victoria and the Malayalee community has taken keen interest in the upcoming exhibition and is extending all support to make it a grand success,” Bhasi said.

Prabhakar has decided to hold similar exhibitions in other Australian states. And, for his future projects he will explore the possibility of a fusion of Australia’s rich artistic tradition with his own.