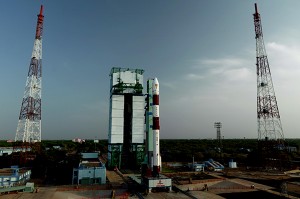 The countdown for the launch of an Indian rocket Monday morning that will carry five foreign satellites is progressing smoothly, the Indian space agency ISRO said Sunday.

The 49-hour countdown for the rockets flight started Saturday morning at Indias rocket port in Sriharikota in Andhra Pradesh around 80 km from here.

This is the first space mission after the National Democratic Alliance (NDA) government’s coming to power.

The five satellites are from four countries – France, Germany, Canada and Singapore.

The rocket’s main luggage will be the 714-kg French earth observation satellite SPOT-7. The other satellites are: 14-kg AISAT of Germany; NLS7.1 (CAN-X4) and NLS7.2 (CAN-X5) from Canada each weighing 15 kg; and the seven-kg VELOX-1 of Singapore.

The satellites are being launched under commercial arrangements that Antrix Corporation has entered into with the respective foreign agencies.

ISRO officials are hoping that the agencyï¿½s around 20-minute crucial space mission will turn out to be a grand success.

As per the mission plan, the rocket will first release its heaviest and most costly luggage -SPOT-7 – at around 18 minutes after the launch.

India had launched another French satellite – the 712-kg SPOT-6 in 2012. The latest in the SPOT family of satellites is the SPOT-7.

Incidentally SPOT-7 is the heaviest foreign satellite to be carried by PSLV.

Starting from 1999, India has launched 35 foreign satellites till date using its PSLV rocket. The successful launch of five satellites Monday would take the tally to 40.

India began its space journey in 1975 with the launch of Aryabhatta – using a Russian rocket – and till date it has completed over 100 space missions including missions to the Moon and Mars.