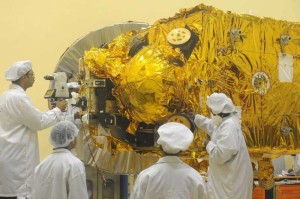 India’s spacecraft Monday entered the Martian sphere of influence on way to the red planet’s orbit early Wednesday, while cruising in the sun’s orbit.

“Our navigators’ calculation shows that our Mars Orbiter Mission (MOM) has entered the gravitational sphere of influence of Mars around 9 a.m.,” a senior Indian space agency official said here.

The 475 kg (dry mass) spacecraft with five scientific experiments to explore the celestial planet has been programmed for the fourth course (trajectory) correction later in the day (2.30 p.m.) to ensure its smooth insertion into the Martian orbit Sep 24 from the solar orbit.

“We will also be test firing the main liquid fuel engine beneath the spacecraft for nearly four seconds to reactivate, as it was switched off after its trans-Mars injection over nine months ago (Dec 1) into the sun’s orbit for its voyage through the inter-planetary space,” state-run Indian Space Research Organisation (ISRO) Scientific Secretary V. Koteshwara Rao said.