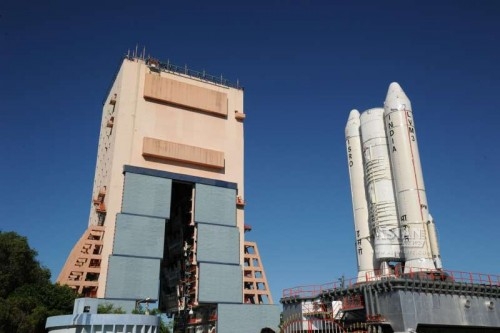 Venkatachari Jagannathan writes about India’s long and exciting journey into space and beyond in UK’s  top Asian newspaper.

India’s first satellite – Aryabhata – was launched successfully by a Russian rocket on an April day 40 years ago, taking the country on an exciting space odyssey as far as the Moon and the Mars.

The year 2015 and the month April are significant for the Indian space programme. It was in April forty years ago (April 19, 1975) that India’s first satellite Aryabhata weighing 358 kg was launched successfully by a Russian rocket.

Interestingly, India has marched ahead in satellite building capability to roll out communication spacecraft weighing three tonnes and has also sent out satellites to orbit moon and mars.

It was again in the month of April but in 2001 (April 18, 2001), that the first development flight of India’s heavy rocket Geosynchronous Satellite Launch Vehicle (GSLV) rocket was launched.

However the development of the GSLV rocket that can put into orbit heavier satellites lagged. Two successive failures of GSLV rockets had put the project behind by several years.

“During those days infrastructure was not available and we used what was available. In Bangalore we even converted a toilet into a data receiving centre for our first satellite Aryabhata,” U.R. Rao, former chairman of Indian Space Research Organisation (ISRO) told IANS on Monday over phone from Bangalore.

“Starting from the scratch was the challenge before us while we began the Aryabhata project. Majority of the team members were new to this field. The time given was just two and half years so that it could be flown in a Russian rocket. Building a clean room, thermo vacuum room and other facilities were all new,” recalled Rao.

According to him, the choice of building the satellite centre was between Bangalore and Hyderabad.

“However Bangalore had some facilities like industrial sheds. We took six such sheds each measuring around 5,000 sq.ft,” Rao said.

The Aryabhata satellite project was initially pegged at Rs.3 crore but cost a little more, as furniture and other things had to be bought.

“Many of the techniques we used in those days in building the satellites are still followed by ISRO now,” Rao said.

On naming India’s first satellite after the country’s great astronomer, Rao said: “We had suggested three names. Aryabhata was on the top. It was followed by Maitri and Jawahar. Indira Gandhi the prime minister chose Aryabhata.”

Success started smiling at ISRO from INSAT-1B onwards which according to Rao ushered in the communication revolution in India.

There was no looking back for the space agency on the satellite side. From one tonne satellites, the INSAT series started growing in weight to become three tonne and ISRO later started making satellites for others.

India’s high point in its space odyssey was its moon and mars mission.

While it is normal to compare ISRO’s achievement in satellite and rocket technologies, space scientists said both cannot be compared.

“Rockets and satellites cannot be compared. While both may belong to the family of space technology, comparing both is like comparing apples and oranges. The challenges in both the segments vary widely,” a senior official of ISRO said preferring anonymity.

In the case of building the heavy rocket to launch four tonne communication satellites and save foreign exchange, ISRO is now in the process of perfecting the technology.

“We are planning to launch GSLV-MkII rocket sometime in July or August this year. The rocket will be powered by indigenous cryogenic engine. The stacking of the rocket is expected to happen in May,” K. Sivan, director, Liquid Propulsion Systems Centre (LPSC) said.

He said after that several other tests on the performance of the engine will be carried out.

“We are targeting to fly the GSLV-Mk III in Dec 2016 if all things go well,” Sivan said.

While India started hitting success in building INSAT satellites, scientists at Vikram Sarabhai Space Centre (VSSC) in Thiruvananthapuram were toiling to get their rocket right.

“The two ASLV failures were the real test beds for perfecting the PSLV rocket. Issues like rocket tumbling, monitoring of rocket’s main forces, detailed profiling of wind and other issues were done,” S.C. Gupta, former director of VSSC, had told IANS earlier.

The third ASLV with Stretched Rohini Satellite Series (SROSS) turned out to be successful but the result of the first PSLV flight in 1993 was negative owing to a software error, which was later sorted out.

Since then there was no looking back for ISRO as far as Polar Satellite Launch Vehicle (PSLV) rocket is concerned. The space agency has now three PSLV variants.

“As technology was not available we developed our own navigational systems, propellant and all the elements of the launch vehicle with help of Indian industry,” Gupta recalled.