As Tehran’s relationship with Washington remains fidgety, it is walking a tightrope in its bilateral relationships with the US’ rival, China and ally, India.

Despite the US sanctions, which has slowed down the pace of the development of the Chabahar port in Iran by India, Tehran and New Delhi on Sunday shipped Afghanistan’s first transit goods to China.

Afghanistan’s transit cargo of dried fruit was sent from Shahid Beheshti Port in Chabahar to the Indian port of Mundra, where it was unloaded and then loaded on another ship for its final destination, Tianjin Port in China, Iranian media reports said.

Quoting Director-General of Ports and Maritime Department of Sistan-Baluchestan province, Behrouz Aghaei, media in Tehran said: “While the world is affected by the coronavirus pandemic, Shahid Beheshti Port in Chabahar has taken a big step to facilitate trade between Central Asian countries and Afghanistan with the countries of South and Southeast Asia and the Far East by establishing regular container transportation services.”

In the last one month, Afghanistan sent three transit consignments to India via Shahid Beheshti port in Chabahar.

New Delhi has invested $500 million in the Chabahar port, which connects India with Afghanistan and Central Asia, bypassing Pakistan.

Chabahar consists of two separate ports – Shahid Kalantari and Shahid Beheshti, each of which has five berths.

India is to build two new berths under an agreement which became operational in 2016.

Since December 2018, India has handed 82 ships with 12 lakh tonnes of bulk cargo in 8,200 containers from Chabahar.

The government in its last budget doubled the allocated funding for the development of the port.

Iran’s use of the port to send Afghan transit goods to China on Sunday came after reports in New Delhi speculatively reported that the Hassan Rouhani government has decided to exclude India from the construction project of Zahedan, a railway line linking the Chabahar port with Afghanistan because of delays from India in funding the project.

The Modi government denied the reports arguing that Tehran is yet to nominate an authorised entity to finalise the technical and financial issues related to the venture.

But the Rouhani government’s desperation to start work on the Chabahar-Zahedan railway is influenced by the fact that it wants to return to power in the elections which are due in 2021.

Though India got a waiver from the US government for the development of the Iranian port, it is not clear whether railway and other projects are exempted from the sanctions. India has already exited the Farzad-B gas field project where the Oil and Natural Gas Corporation (ONGC) was supposed to carry out explorations.

On Saturday, Iranian Foreign Ministry’s Director-General for West Asia Seyed Rasoul Mousavi tweeted: “Thousands friends are few and one enemy is many. Iran is a country for lasting and strategic friendships with all who want to be friends of Iran. Of course, Iran’s neighbours, India, China and Russia, are at the forefront of Iran’s foreign policy.” 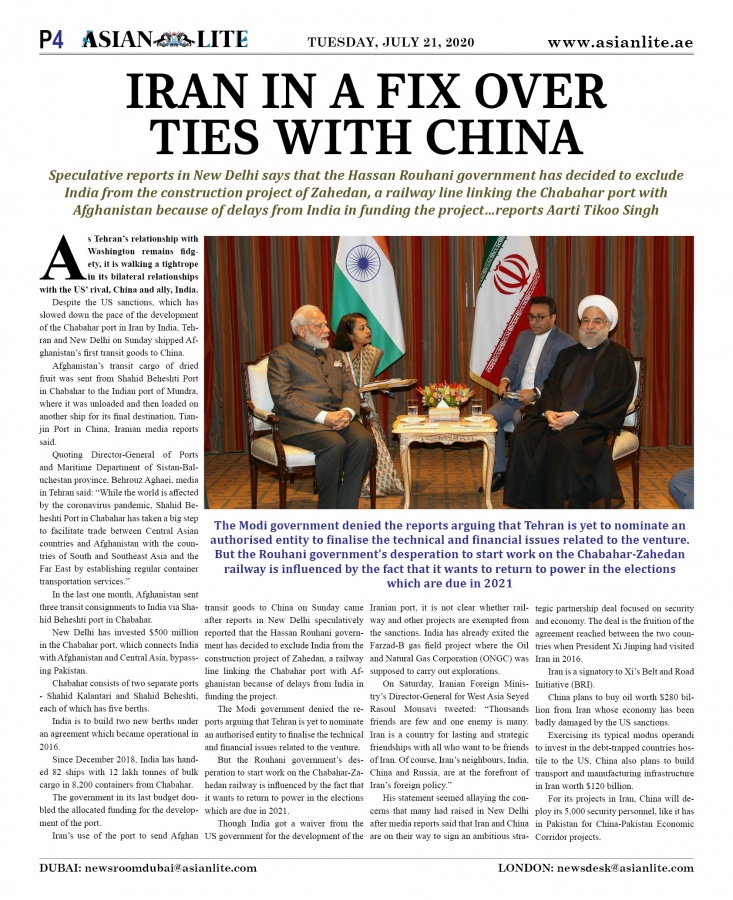 His statement seemed allaying the concerns that many had raised in New Delhi after media reports said that Iran and China are on their way to sign an ambitious strategic partnership deal focused on security and economy. The deal is the fruition of the agreement reached between the two countries when President Xi Jinping had visited Iran in 2016.

Iran is a signatory to Xi’s Belt and Road Initiative (BRI).

China plans to buy oil worth $280 billion from Iran whose economy has been badly damaged by the US sanctions.

Exercising its typical modus operandi to invest in the debt-trapped countries hostile to the US, China also plans to build transport and manufacturing infrastructure in Iran worth $120 billion.

For its projects in Iran, China will deploy its 5,000 security personnel, like it has in Pakistan for China-Pakistan Economic Corridor projects.