The Iraqi security forces on Monday recaptured a city in western province of Anbar, while the Sunni militants took full control of a city in northern part of the country, an official said. 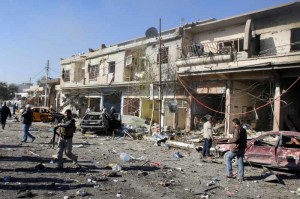 The Iraqi army, police and border guards fought sporadic clashes with gunmen in the city of Qaim, some 330 km northwest of the capital Baghdad, and took control over the city, Xinhua quoted a police source as saying Monday.

The troops also waged an offensive on the border with Syria, and re-took the posts they left late Wednesday after battling the militants, the source said.

The Iraqi air force carried out several airstrikes on some neighbourhoods of the city of Fallujah, 50 km west of Baghdad, killing 13 people and damaging some houses, a provincial police source said.

In Iraq’s northern province of Nineveh, Sunni militants, including the militants linked to the Islamic State in Iraq and Levant (ISIL), an al-Qaida offshoot, have taken full control of the city of Tal Afar, some 70 km west of provincial capital Mosul, after fierce clashes with Iraqi security forces and volunteers from the residents, Mohammed Abdul Qader, head of the city council, told Xinhua.

“Tal Afar has fallen in the hands of the militants of Daash (as the ISIL is called) after they heavily pounded the city with mortar rounds and rockets since last night,” Abdul Qader said.

“The defenders of the city have withdrawn after they ran out of their ammunition,” he said, adding that many security officers disappeared after the battle.

The Sunni-majority province of Nineveh and its capital Mosul have long been a stronghold for insurgent groups, including Al Qaida militants, since the US-led invasion of Iraq in 2003.

Large parts of the province are in the hands of militant groups since last week.

The militant groups have seized swathes of territories after the Iraqi security forces withdrew from their posts in Nineveh and other predominantly Sunni provinces.