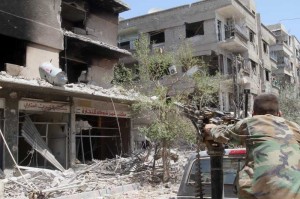 The United States, along with its Arab allies, has continued airstrikes on positions of the Islamic State  group in Syria by targeting oil facilities controlled by the militants.

The US Central Command, in charge of American military operations in the Middle East, said Wednesday that the raids were carried out by fighter planes and cruise missiles on 12 refineries under IS control in remote areas of eastern Syria.

The US and its four Arab allies – Saudi Arabia, Bahrain, the United Arab Emirates (UAE), and Jordan – with the logistics support of Qatar, bombed several bunkers of the jihadi group in Syria for the first time early Tuesday.

Pentagon spokesman Rear Admiral John Kirby said in an interview with CNN that in the latest attacks, the planes of the Arab allies outnumbered those of the US, especially those from the UAE and Saudi Arabia.

The Central Command said that the airstrikes, which lasted for about two hours, were carried out in the proximity of the cities of Mayadin, Al-Hasakah, Abu Kamal and Deir al Zur.

“We are still evaluating the effectiveness of the attacks on the refineries, but the initial indications suggest success,” the Central Command said in a statement.

The refineries were being used by the jihadis to earn more than $2 million per day by selling up to 500 barrels a day, according to American intelligence, although some experts believe the amount could be greater.

Oil sales, along with extortion and looted antiquities, are a major source of income for the IS.

The US has been launching most of the attacks by fighter planes from the George H.W. Bush aircraft carrier in the Persian Gulf, with cruise missiles launched from the cruiser, the USS Philippine Sea, and from the destroyer, the USS Arleigh Burke, in the Red Sea.

US aircraft and drones are also flying over Syria to gather intelligence and also to mark targets.

The US-led air offensive against IS positions in Syria began Monday, following weeks of attacks on the jihadis in neighbouring Iraq.