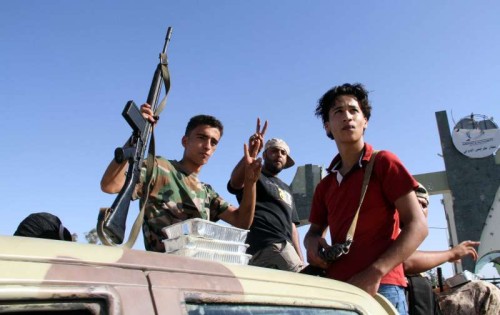 According to Libya’s transitional plan, the House of Representatives elected in the June polls has already replaced the former interim General National Congress government. The GNC took over office in 2012.

Earlier on Tuesday, the outgoing General National Congress (GNC) granted trust to the new cabinet which is headed by Omar al-Hasi and composed of 19 ministries and three supreme councils.

The inauguration ceremony took place with the presence of Saleh al-Makhozom, second vice president of the GNC, as 13 ministers named in Hasi’s cabinet took the legal oath.

According to Libya’s transitional plan, the newly elected parliament, the House of Representatives, has already replaced the former interim GNC. However, the Islamist armed alliance Libya Dawn, which achieved a series of military progress lately in Tripoli, backed the GNC to resume power and form its own government against the new one, which means the country is now juggling two rival parliaments and governments.

Since May, Libya has endured bloody clashes between armed Islamist groups and pro-secular militias. The conflict has spread to other major cities like Benghazi, Gharyan and Zawiya.