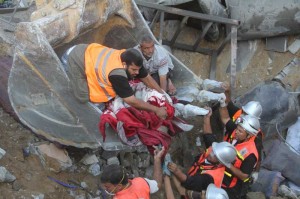 The Israeli army Sunday denied responsibility for the deaths of 16 Palestinians during Thursday’s attack on a UN school in northern Gaza.

“The inquiry as well as documented footage conclude that a single errant mortar landed in the courtyard of the (United Nations Relief and Works Agency for Palestine Refugees) UNRWA school in Beit Hanun when it was completely empty,” Xinhua quoted an Israel Defence Forces (IDF) spokesperson as saying.

The army said the findings are a result of a “comprehensive inquiry” of the events Thursday, in which Hamas militants fired anti-tank missiles at IDF troops near the school and the IDF responded by firing mortars.

“The IDF stresses it does not operate or target international organisations in the Gaza Strip,” the spokesperson added.

Some 16 people, mostly women and children, were killed in the school and dozens wounded.