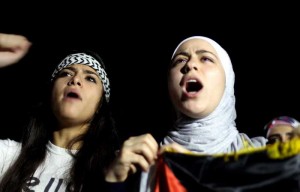 Four more Palestinians were killed Wednesday in a new Israeli airstrike on the Gaza Strip, taking the death toll in nine days of bombing to 213 even as the Islamic Hamas movement rejected a Egyptian ceasefire proposal with Israel.

Israeli war jets pounded western Gaza city Wednesday killing four Palestinian children and wounding 10 others while they were on the beach of Gaza, Xinhua reported.

Ashraf al-Qedra, a spokesman of the Gaza health ministry, told reporters that four children were killed and six others wounded in an Israeli airstrike on the beach of Gaza city.

He added that since early Wednesday, 16 Palestinians were killed and more than 20 wounded in the ongoing airstrikes on houses, empty lands and on the beach all over the Gaza Strip.

“Death toll in the Gaza Strip since the beginning of the Israeli aggression July 8 climbed to 213 and more than 1,500 were injured,” said al-Qedra, adding that more than 50 percent of the victims were children and women.

Earlier in the day, Hamas officially informed Egypt that it did not accept the Egyptian initiative of ceasefire between Gaza militants and Israel, a Hamas official said.

Sami Abu Zuhri, Hamas spokesman in Gaza, said in a press statement that his movement has officially informed Egypt that it doesn’t accept the initiative without elaborating.

However, efforts on reaching a ceasefire between Israel and Gaza Strip militants seemed to have been renewed after reports said that Palestinian President Mahmoud Abbas was headed to Egypt to discuss a truce in the territory.

Abbas is to meet Hamas chief Khaled Meshaal and another Hamas top leader Musa Abu Marzooq in Cairo to study an initiative presented by Egypt for a ceasefire.

Nabil Shaath, member in Abbas Fatah Party, told reporters in Ramallah that Abbas would meet with Egyptian President Abdel Fattah Sisi and then with Mesha’al and Abu Marzooq. 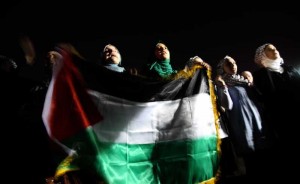 However, Mushir al-Masri, a senior Hamas leader in Gaza, told Xinhua in a telephone conversation that Hamas wanted Arab and regional guarantees before talking about any new truce or ceasefire with Israel.

“Over the past few days, Hamas has been receiving many contacts from Arab and Islamic countries to discuss a truce, while Turkey and Qatar are exerting intensive efforts to push forward declaring a ceasefire,” said al-Masri.

He stressed that Hamas was interested in stopping the fighting in Gaza, but added that “before ceasing fire, there have to be guarantees that oblige Israel not to violate any upcoming truce agreement.”

Meanwhile, al-Masri denied that Hamas and Islamic Jihad had earlier presented any initiative to Egypt calling for a 10-year truce with Israel, adding that “this is an Israeli nonsense always published in the media”.

Earlier, Israel reportedly told the residents of two neighbourhoods in Gaza city, Sheja’eya and Zaytoon, and the northern Gaza Strip town of Beit Lahia to leave their homes.

Israeli media reported that the army intended to destroy thousands of houses in the three areas because there were many tunnels dug underneath them.