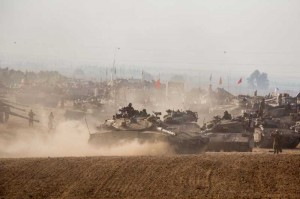 Israeli navy commandos raided Gaza in a first ground assault on the strip Sunday, stepping up its six-day offensive even as the UN called for a ceasefire between the two sides.

It is the first time that the Israeli military acknowledged having entered the Gaza Strip since the deadly air campaign, dubbed ‘Operation Protective Edge’, began last Tuesday.
A military spokesperson said the site of the Israeli ground incursion was being used as a launching site for long-range attacks against Israeli civilians.

Four soldiers were “lightly wounded” in the fire exchanges, but all troops returned home safely, the spokesperson said.

Gaza militants Sunday continued to fire dozens of long-distance rockets at Israel, reaching as far as Tel Aviv, and Caesarea in the north.

Since Israel’s Operation Protective Edge began Tuesday, more than 800 rockets were launched from the Gaza Strip towards Israel.

So far, no Israeli has been killed.

The naval commando raid comes as Israeli forces intensified its attacks on Gaza Saturday, leaving 56 people dead, the heaviest death toll since the beginning of the operation, according to the Palestinian health ministry statement.

The Palestinians death toll now stands at 165, while at least 780 others were wounded, according to the health ministry and Gaza-based Al Meazan Centre for Human Rights.

The UN estimates that some 77 per cent of the casualties were civilians.

The Israel’s military Sunday said it dispersed leaflets above the northern Gaza Strip, urging the residents to evacuate their homes as the army prepares for the heaviest bombing in the area.

The leaflets, dropped from the air, warned the residents in the northern town of Beit Lahiya, near the border with Israel, to stay away from the area.

“The civilians are requested to evacuate their residences immediately and move by 12 p.m. today,” the leaflet said Sunday.

“The Israel Defence Force’s (IDF) campaign is to be short and temporary. Those who fail to comply with the instructions will endanger their lives and the lives of their families. Beware,” the leaflet added.

“These underground targets can be reached only by extremely heavy bombardment, thus the evacuation,” official added.

“We do not wish to harm civilians in Gaza, but these civilians must know that remaining in close proximity to Hamas terrorists and infrastructure is extremely unsafe,” Peter Lerner, the military spokesman, said in a statement.

“Our campaign will continue as long as Hamas persists with firing rockets at Israel,” Lerner added.

The UN Security Council Saturday unanimously approved a statement that urge for calm and peace talks.

The statement called on Israel and Hamas to reinstate the truce agreement which ended the previous round of fighting in 2012.

However, Israeli leaders said they are determined to continue pounding Hamas sites until the rocket fire towards Israel ceases.

“No international pressure will prevent us from striking, with all force, against the terrorist organisation which calls for our destruction,” Israel’s Prime Minister Benjamin Netanyahu said Friday.

The US, while affirming Israel’s right to defend itself, offered help in truce negotiations.

Israel began the assault Tuesday in what it said was a response to weeks of heavy rocket fire out of the Hamas-controlled Gaza.