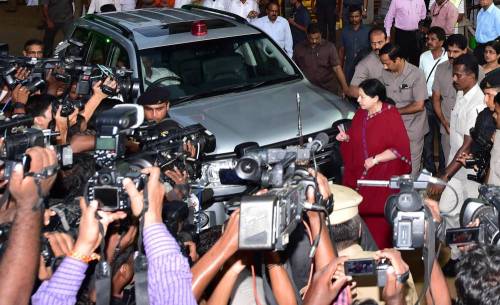 Tamil Nadu Chief Minister J. Jayalalithaa flew down to Bangalore in a special aircraft from Chennai for the verdict in the disproportionate assets’ case against her.

The verdict will be delivered by the special trial court in the central jail at Parapanna Agrahara in the city’s southern suburb.

A couple of Tamil Nadu cabinet ministers and AIADMK functionaries were present at the airport to greet Jayalalithaa on arrival amid tight security.

“Jayalalithaa left the airport and is on way to the special court under escort. We have ensured traffic-free route for her convoy to reach the jail premises before 11 a.m.,” a senior police official said.

Jayalalithaa has been charged with acquiring wealth valued at Rs.66.65 crore disproportionate to known sources of her income during 1991-96 when she served as Tamil Nadu’s chief minister in the first term.

As Jayalalithaa has Z-plus security cover, the police have made fool-proof security arrangements to prevent any untoward incident when she will be in the court to hear the judgement along with three other accused.

City police turned Parapanna Agrahara into a fortress and imposed ban order 1 km around the central jail as part of unprecedented security measures.

“We have deployed about 2,000 security personnel in and around the central jail and about 5,000 additional forces have been positioned across the city to maintain law and order and ensure peace,” Additional Commissioner of Police Alok Kumar said.

As a precautionary measure, inter-state bus services between Bangalore and Hosur across the border in Tamil Nadu have been suspended since 6am till late afternoon.