A year after the special status of Jammu & Kashmir was scrapped, the government claims that peace and normalcy has returned along with development and an additional deployment of at least 20,000 security personnel and officers has been retained.

Before August 5, 2019, the Central Reserve Police Force (CRPF) – the leading internal security force of the country – had deployed 300 companies each comprising 100 men. In the run up of the abrogation of Article 370 another 200 companies were rushed. The additional 200 companies, which the CRPF pulled from Chhattisgarh, Jharkhand, and North East, who were countering Left-wing extremism and militancy respectively, leaving holes in the security grid.

Union Home Minister Amit Shah had told the Parliament on November 20 explaining how the abrogation of special status had helped usher in peace. He had asserted that normalcy has been restored in Kashmir Valley following the abrogation of Article 370. Shah had said that security concerns have to be factored in before restoring internet connectivity in the region. The minister said that a decision on restoration of the internet will be taken based on an assessment of the situation by the local administration.

About 4,000 men alone were shifted from areas affected by Left Wing Extremism, whereas at least 3,000 men countering guerrillas in the jungles of north-eastern states along with the Indian Army and local police.

The CRPF has had to cut short training, cut back sending replacements and even cut short leaves in some cases as it was stretched between commitments across India – Jammu & Kashmir, Left Wing Extremism, and counter terror operations in the northeast, senior government officials said.

It has been a year yet the extra forces deployed in the valley have not been pulled back. A senior IPS officer stated that as per assessment, the threat in the valley from Pakistan-based terrorists is very high.

The figures state that there has been significant decline in terror activities in the valley. This year till July, a total 120 terror-related cases have been reported and last year during the same period – between January and July — a total of 188 cases were reported. Similarly, this year till July, 35 security personnel lost their lives in line of duty and last year during same period 75 security personnel had lost their lives fighting terrorists. But the government has decided to keep extra deployment of forces in the valley for reasons still unknown.

The authorities have announced the imposition of curfew in Srinagar district on August 4 and 5, after receiving intelligence reports which suggested that subversive elements are planning to disrupt peace during this period.

August 5 will mark the first anniversary of the abrogation of Articles 370 and 35A which granted special status to the erstwhile state of Jammu and Kashmir, paving the way for the bifurcation of the state into two Union Territories of J&K and Ladakh. 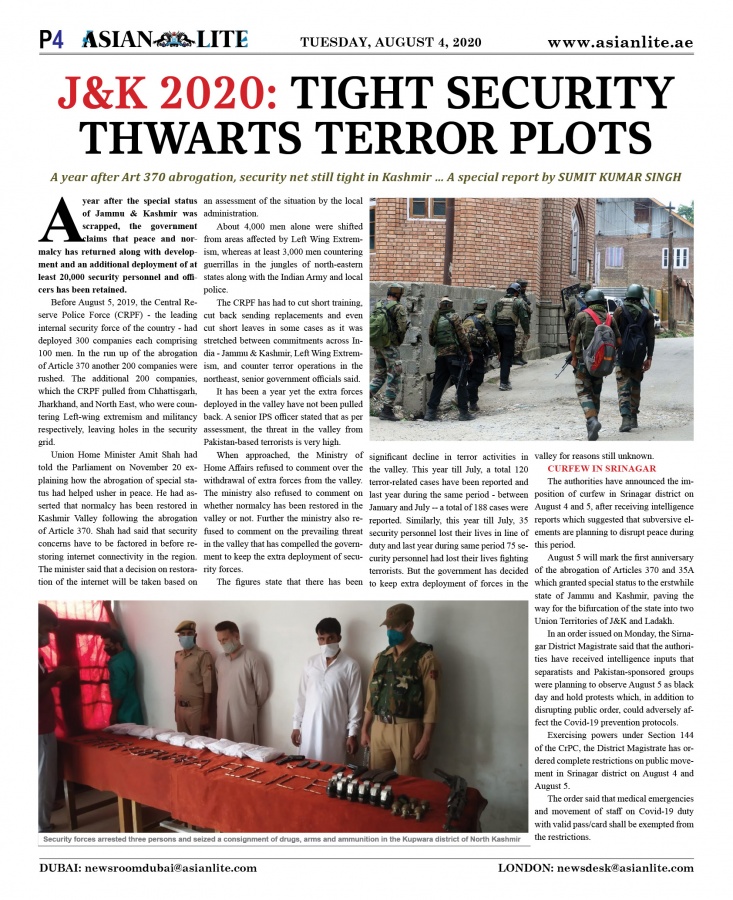 In an order issued on Monday, the Sirnagar District Magistrate said that the authorities have received intelligence inputs that separatists and Pakistan-sponsored groups were planning to observe August 5 as black day and hold protests which, in addition to disrupting public order, could adversely affect the Covid-19 prevention protocols.

Exercising powers under Section 144 of the CrPC, the District Magistrate has ordered complete restrictions on public movement in Srinagar district on August 4 and August 5.

The order said that medical emergencies and movement of staff on Covid-19 duty with valid pass/card shall be exempted from the restrictions.