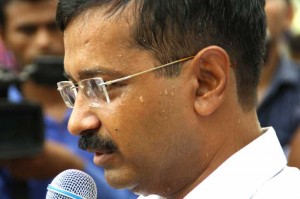 AAP leader Arvind Kejriwal sought an appointment with Delhi Lt. Governor Najeeb Jung Thursday, a day after the BJP indicated that it could form a government in Delhi.

Kejriwal tweeted: “I have sought an appointment from LG for all AAP MLAs to meet him today. Waiting for his response.”

Satish Upadhyay, the new president of the Bharatiya Janata Party (BJP) in Delhi, told the media Wednesday that his party could consider government formation if Najeeb Jung gave an invitation.

Kejriwal, who quit as chief minister of Delhi Feb 14 after 49 days in power, tweeted: “Can LG invite a party to form government without prima facie satisfying himself whether the party has numbers?”

Kejriwal had led the AAP to a stunning victory in last year’s Delhi assembly election and had formed the government with Congress backing.

In another tweet, Kejriwal said: “Would LG encourage horse trading if he invites a party to form government despite knowing that they don’t have number?”

Kejriwal also questioned whether Jung can invite the BJP, which has earlier declined to form the government.

“If a party (BJP) has once already declined the offer to form government – can the LG invite the same party in the existing Vidhan Sabha again?” he said.

The BJP won 31 of the 70 seats in the December 2013 assembly election in Delhi and the Aam Aadmi Party 28, ousting the Congress, which got only eight seats after being in power for 15 long years.

“…Shouldn’t LG first ask for a list of supporting MLAs? Else wouldn’t LG be seen toAbe acting partisan?” he asked.