Torrential rains, overflowing rivers and a series of landslides have resulted in the death of 324 people, leaving over three lakh people in over 2,000 relief camps….reports Asian Lite News. In a message to the Indian community, Chief Minister Pinarayi Vijayan said the southern needs the diaspora help to millions of displaced people

Prime Minister Narendra Modi arrived in Kerala on Friday night to see for himself the rain-battered Kerala and also survey the relief and rescue operations.

Torrential rains, overflowing rivers and a series of landslides have resulted in the death of 324 people, leaving over three lakh people in over 2,000 relief camps.

The Prime Minister was received by Kerala Governor P. Sathasivam, Chief Minister Pinarayi Vijayan, his cabinet colleagues among others. He will spend the night at the Kerala Raj Bhavan, the official residence of the Governor.

On Saturday, Modi along with Vijayan will make an aerial survey of the worst affected districts. Before returning to Delhi from Kochi, the Prime Minister will chair a meeting to discuss the grave situation in the state.

Earlier in the day Modi had tweeted “Later this evening, I will be heading to Kerala to take stock of the unfortunate situation due to flooding.”

“Had a telephone conversation with Kerala Chief Minister…We discussed the flood situation across the state and reviewed rescue operations.”

The death toll in rain-battered Kerala touched 324  on Friday as a red alert continued in 12 districts, with various agencies continuing the rescue operations after rains subsided to evacuate over 80,000 persons during the day.

Chief Minister Pinarayi Vijayan told the media in the night that the situation arising out of unprecedented floods and subsequent havoc caused by turgid rivers and gushing waters in Kerala continues to be “grave”.

He said that since August 8 — when the rains began pounding the southern state — as 3,14,391 persons have been lodged in 2,094 relief camps across Kerala.

“The worst affected districts include Pathanamthitta, Alappuzha, Ernakulam and Thrissur,” Vijayan said after a review meeting with state officials.

Hundreds of defence personnel, National Disaster Response Force (NDRF) teams, helped by more than 20 helicopters, mounted search and rescue operations. Fishermen along with their motorboats too joined the humanitarian efforts.

More helicopters were pressed into service on Friday to fly sorties for rescue and relief.

Defence Minister Nirmala Sitharaman sanctioned the extra choppers, as people marooned in Chengannur and Chalakudy could only be airlifted to safety. 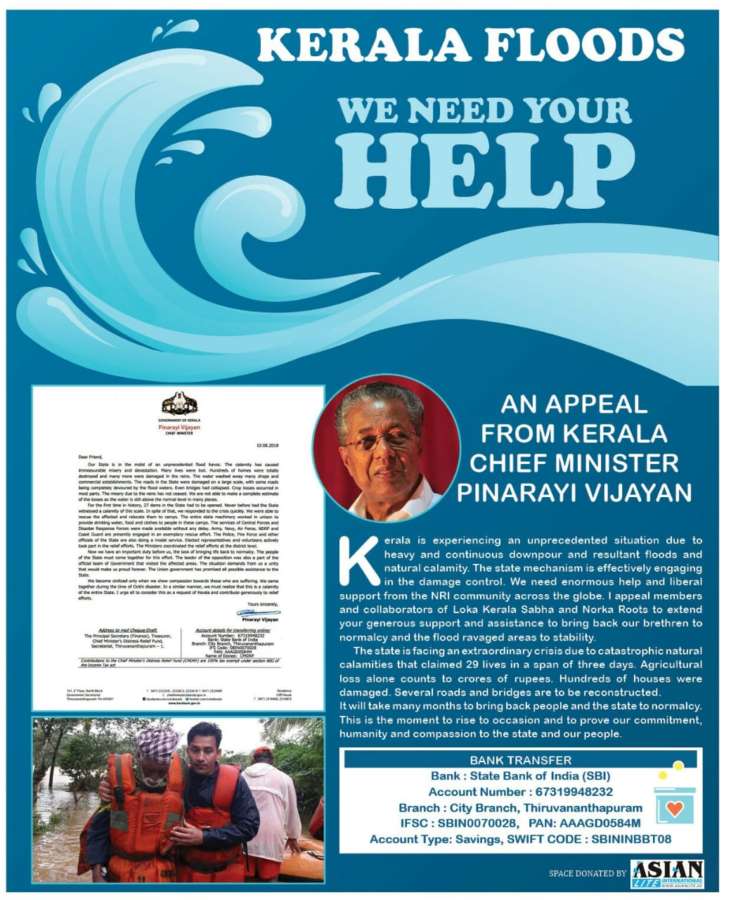 Waters from the Periyar river and its tributaries kept many towns in Ernakulam and Thrissur districts submerged. The worst affected include Paravur, Kalady, Chalakudy, Perumbavoor and Muvatupuzha.

“We have no food. There are 150 persons waiting to be rescued,” rued a group of people who sent a video clip to TV channels from Chalakudy.

Thousands of people are still perched on high-rise buildings waiting to be rescued and taken to relief camps. Over 50,000 people are lodged in the Ernakulam and Thrissur camps alone.

Intensity of rains, however, decreased in several districts since Friday morning, leading to decrease in water level in three big dams in Idukki district.

The red alert in Kasargode and Thiruvananthapuram districts was withdrawn on Friday though the warning continued in other 12 districts in Kerala.

“On Saturday, 25 big Army boats will be deployed for evacuation in Kalady, Chengannur and Thiruvalla. More helicopters will be used for rescue and relief. We are confident that by Saturday, we will be able to rescue all those awaiting help,” the Chief Minister said.

“The Centre has allowed the use of the Cochin naval airbase for commercial operations of small aircraft, as the Cochin International Airport has been closed due to flooding. Punjab, Maharashtra, and Telangana have said they will provide food packets while Delhi Chief Minister Arvind Kejriwal has pledged Rs 10 crore and other help,” Vijayan said.

Waters in Idukki and Wayanad areas and certain areas of Pathanathitta has receded, he said.

“One big problem that rescue teams are facing is that some people are unwilling to move to the relief camps. This is not good for their safety,” the Chief Minister added.

Many people, especially in Kuttanadu area, refused to move to the camps, Finance Minister Thomas Issac said. Rising waters though forced them to change their plan.

“The biggest problem is disruption in telecommunication facilities… We are unable to communicate freely. All relief camps are functioning well and none has any complaint. In Munnar, I am given to understand that the Army is restoring damaged roads. Another huge problem is spread of fake news, which has to be tackled,” Vinod said.

Helicopters loaded with food packets took off from the state capital and dropped these in central districts.

Authorities in worst-affected districts took help of big lorries to navigate flooded roads to reach those marooned in small pockets.

Amid the grim scenario in the state, there was good news: A pregnant woman Sajitha Jabeel airlifted on Friday morning by a Navy rescue team from a waterlogged place near Aluva delivered a baby boy at the Kochi Naval Base hospital soon after she was admitted.

Meanwhile, authorities in Ernakulam faced problems as a camp set up at U.C. College at Aluva was overcrowded with over 8,000 people.

Aluva legislator Anwar Sadat said shortage of fuel was hampering rescue as only boats were being pressed into service.

“Things are very bad. Aluva is completely marooned. People have no food or water. Our only solace is the numerous fishermen who are rescuing us.

“But now even their families are asking them to return. More defence personnel are required to speed up the rescue and relief,” Sadat said while pleading for help.

Hundreds of fishermen from coastal villages of Thiruvananthapuram arrived at Pathanamthitta and began rescue even as helicopters too began to airlift affected persons to safer places.

On Friday, Achenkovil river overflowed into Pandalam town. A boat overturned while carrying out the rescue work, but luckily all on board were saved.

The MeT office forecast lesser rains in Kerala till Saturday, which should bring some relief to the embattled authorities.

Rescue operations are progressing well in Malappuram, Kozhikode and Wayanad. In the last two districts, over 20,000 camps have been set up.

Major national and state highways, as well as rail traffic, continued to be disrupted in various parts of the state though more government buses were operated from various depots on Friday.

Railway services between Ernakulam and Thrissur remained suspended even as long- distance trains were diverted via Nagercoil route.

Long queues were witnessed in front of petrol stations across the state following reports of shortage of automobile fuel due to floods.

Leader of the Opposition and Congress leader Ramesh Chennithala told the media that even though one should not be finding faults with the state government, a lot needs to be done as thousands of people are still at risk.

“We do not know who is providing all these figures to the Chief Minister… there seems to be a lack of coordination as people are suffering in relief camps,” he claimed.

Kerala is facing the heaviest rains and consequent floods and destruction since 1924, which the state estimates has caused a loss of Rs 8,000 crore.