India and Pakistan are nuclear rivals. Yet both countries have been exchanging a list of their nuclear installations on the first day of every New Year for the past 29 years. This they are doing under a bilateral arrangement that prohibits them from attacking each other’s atomic facilities.

Put simply, nuclear war in the sub-continent is not a danger lurking even in the shadows. But Imran Khan has been harping on N-danger for the past seven months, denouncing India’s ruling party as supremacist and its leader Narendra Modi as Hitler reborn. Pakistan’s military and civilian leaders have picked up the same refrain and have gone ballistic in their attacks on India as though they have become cockier.

Well there is no denying that India has provoked Pakistani leadership by rolling back the special status of its Kashmir (the decision has no bearing on Pakistan held Kashmir or China held Kashmir), and by offering citizenship to Pakistan’s religious minorities turned refugees knocking at its door.

The twin acts have provided good fodder to the Pakistani motor mouths.  Beyond twitter feed and byte thunder, they find themselves powerless to make India bleed. The time tested old instrument – terrorism through proxies- hasproved ineffective in Modi’s Kashmir, going by reports from Ground Zero.

India’s Feb 2019 airstrike on Balakot to eliminate Kashmir – centric terrorist centre deep inside Pakistan ended the status quo of sorts in military preparedness. It has exposed the limitations of Pakistan’s N-bluff.

Yet Prime Minister Imran Khan has not given up his N-rhetoric. And his paronia about an existential threat from India. Whether it is UN General Assembly or whether it is Global Refugee Forum (GRF) in Geneva, his message is a warning of dire consequences in the event of a nuclear war with India.

“If a conventional war starts between the two countries, anything could happen. A country seven times smaller than its neighbour, what will it do — either surrender or fight for its freedom”, he told the UN last September, remarking “My belief is we will fight and when a nuclear-armed country fights till the end it will have consequences far beyond the borders. I am warning you. It’s not a threat but the worry about where are we heading to”.

Khan stuck to the same theme in his address to GRF while predicting a refugee crisis in South Asia on account of Modi government decision to give Indian citizenship to refugees from Pakistan et al.This refugee claim is no more than a mind game as terrifying as Pakistan’s nuclear weapons programme.More so since Pakistan does not have, going by Imran-speak, a “no first use” doctrine, and reserves the right to use low-yield tactical nuclear weapons, to settle scores with India, which had inflicted humiliating military defeats more than once in the past.

Five years ago, in 2015 the Carnegie Endowment for International Peace and the Stimson Center estimated Pakistan’s bomb-making capability at twenty devices annually. Since Pakistan is said to have an arsenal of 110 to 130 nuclear bombs, the Land of the Pure, as Pakistan styles itself, can quickly become the third-largest nuclear power in the world.

According to him, the sea component of Pakistan’s nuclear force consists of the Babur class of cruise missiles. The latest version, Babur-2is deployed on both land and at sea on ships, where they would be more difficult to neutralize. A submarine-launched version, Babur-3, would be the most survivable of all Pakistani nuclear delivery systems.

Military’s Strategic Plans Division, (SPD) – the heart of Pakistan’s National Command Authority, (NCA) -holds the N-weapons in Punjab Province which provides the bulk of manpower for the Army. Pakistan claims that its N weapons are “armed by the appropriate code at the last moment, preventing a rogue nukescenario”.  Well, safety concerns still remain unadulterated.

Of no less concern is the reality that Pakistan has not declared its official nuclear doctrine even as it moved to “Full Spectrum Deterrence” (FSD) from the Bhutto era creed – “minimum credible deterrence”.

The Advisor to Pakistan’s Nuclear Command Authority Lt General (retired) Khalid Kidwai has an interesting take. He headed the SPD for record 14-years. So the Kidwai-speak demands attention.

FSD, he says, focuses on a capability to bring “every Indian target into Pakistan’s striking range” and provides options to select amongst counter-value, battlefield and counter-force targets. 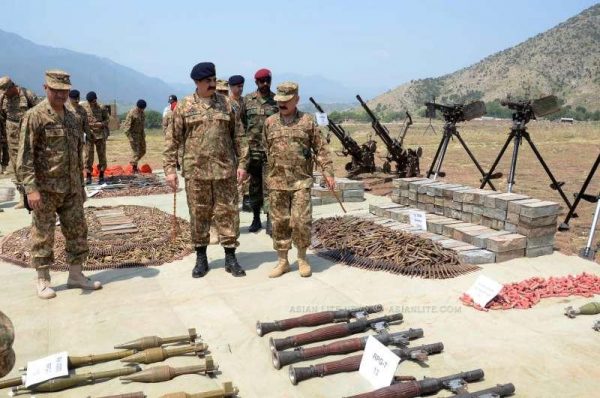 Pakistan’s FSD will bring “the international-community rushing into South Asia to prevent a wider conflagration,” he added as if for emphasis, and told India that it shouldn’t take Pakistan’s nuclear capability as a bluff. “Pakistan reserves all options to protect its territorial and ideological interests if a war is imposed (on it)”.

Significantly, Pakistan is poised to bring yet another plutonium production reactor online this year, marking a significant increase in its bomb-making potentialfrom four reactors at Khushab.

There is speculation that Pakistan is setting up a fifth reactor in the southwest corner of Khushab nuclear site. Google Earth imagery shows a partially completed reactor, with “a configuration generally similar to that of Khushab IV, though with a different orientation”, according to a report on Global Security.Org (Jan 25, 2020).

Based on the size of the cooling towers, experts aver that the power of Khushab V will be, like Khushab IV – about 90 megawatts-thermal (MWth). While Khushab 1 generates 30-40 MWth, the reactors 2 and 3 yield 40-50 MWth each.

These are small reactors by international standards but yield enough plutonium to manufacture more than 12 N-weapons.  None of them is under the safeguards of International Atomic Energy Agency (IAEA). If all the four reactors work to their capacity, Pakistan can easily produce 19 to 26 weapons per year.

Already, Pakistan’s stockpile is said to be larger than that of United Kingdom, its former colonial master, who had graciously carved the Islamic Republic out ofIndia some seventy-five years ago.One estimate is that both have about 200 N weapons, more than North Korea (about 100), but fewer than Israel and India (the two have about 275 bombs), according to Global Security.Org.

“Pakistan must shoulder the responsibility of maintaining the vital strategic balance in the conventional and nuclear equation with India as particular determinant of the state of strategic stability in South Asia,” said Kidwai in his lecture, adding Pakistan is assured that its FSD will bring “the international-community rushing into South Asia to prevent a wider conflagration”.

Is this a new bluffing game or self- delusion at play? It can be both because while branding India as a destabilising force, and anointing Pakistan as the stabilising power, he brandishes FSD as the new weapon to have Pakistan’s way in South Asia. 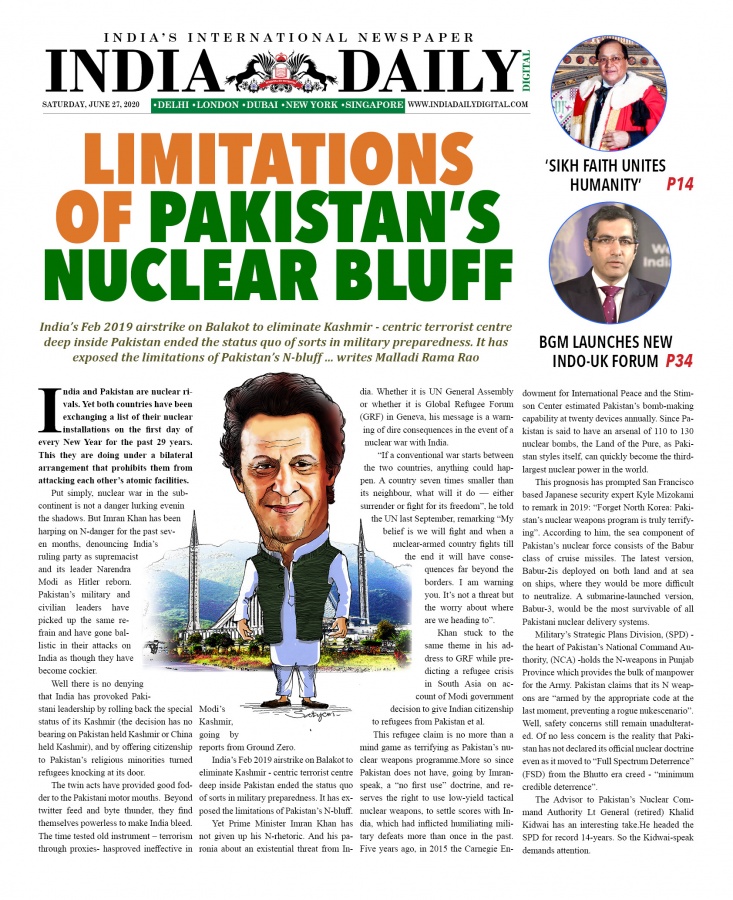 It may be unfair to conclude on the basis of Khalid Kidwai- Speak that Pakistan is getting ready for a nuclear war with India.  But there is no denying that Pakistan is putting in place a robust nuclear capability firstly to deter India and secondly to fight anN-war.

Will the dream or wish materialise – a question that truly belongs to the realm of Ripley’s realm of believe it or not.