Security forces said that some 3,000 police were on duty on Saturday in London ahead of New Year’s Eve celebrations in light of the recent terror attacks in Nice and Berlin….reports Asian Lite News

There would be a large police presence in the centre of London, particularly at Trafalgar Square and near Big Ben and the Palace of Westminster where thousands of people gather annually to watch the New Year’s fireworks along the River Thames, Efe news reported.

London’s Metropolitan Police said they will be working alongside the British Transport Police in order to ensure the safety of the public.

Police were expected to cut off traffic on Saturday afternoon in central London.

Transport for London, which manages the capital’s public transport, said travel would be free on its network between 11.45 p.m. on New Year’s Eve and 4.30 a.m., on New Year’s Day. 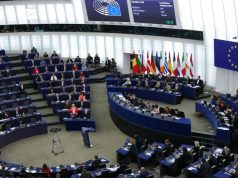