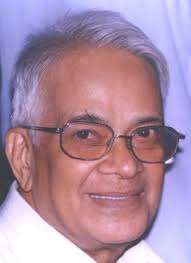 Veteran journalist and former chairman of Prasar Bharati M.V. Kamath, who was one of the earliest biographers of Prime Minister Narendra Modi, died Thursday morning in his native place Manipal in Karnataka, said a relative. He was 94.

Kamath was the Washington correspondent of The Times of India for a decade.

He had been hospitalised for the past few days and breathed his last around 6.30 a.m., said his nephew Jairam Kamath.

“He had been ailing for sometime due to old-age related problems and had been admitted to a hospital here (Manipal)…According to his last wishes…Not to keep his body for long, we shall perform the funeral rites today (Thursday) itself,” Jairam told IANS in Mumbai.

Madhav Vittal Kamath was born Sep 7, 1921 in Udupi, Karnataka. He was a science graduate and initially worked as a chemist for five years before switching to journalism.

Awarded the Padma Bhushan in 2004, Kamath penned over 40 books, including “Gandhi – A Spiritual Journey”, “Reporter At Large”, and co-authored “Narendra Modi – The Architect of a Modern State” (2009).

He started his media career with Mumbai’s venerable daily, the Free Press Journal, as a reporter in 1946 and later worked for its eveninger, Free Press Bulletin.

After his retirement in 1981, he opted to settle down in Mumbai and continued writing books and columns for various national and international publications, including his “alma mater”, the Free Press Journal, till a fortnight before his death.

Kamath was appointed as the chairman of Prasar Bharati, the autonomous public service broadcaster of India.

Till his death, he was the honorary president and director of Manipal Institute of Communications, and on the executive committee of MAHE, a deemed university.